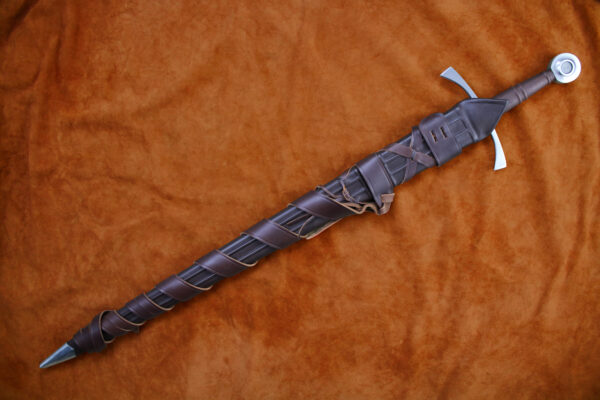 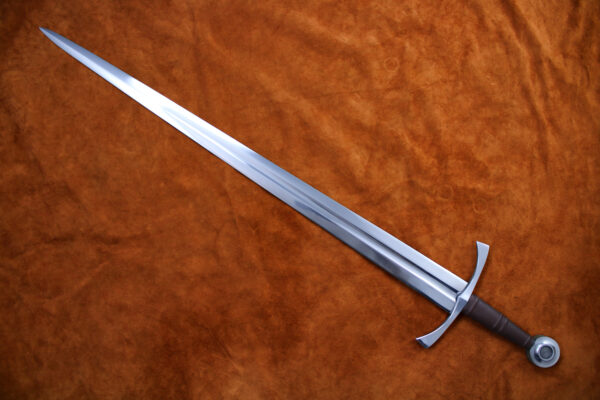 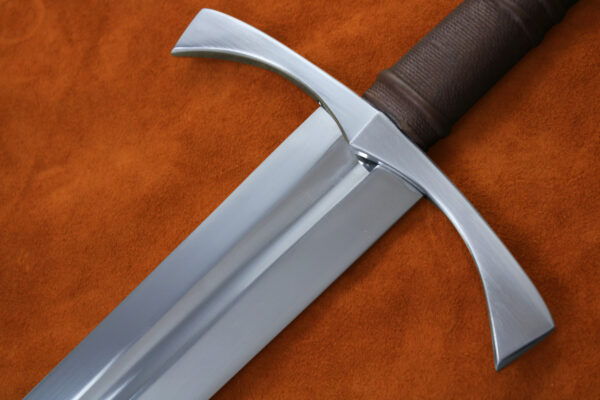 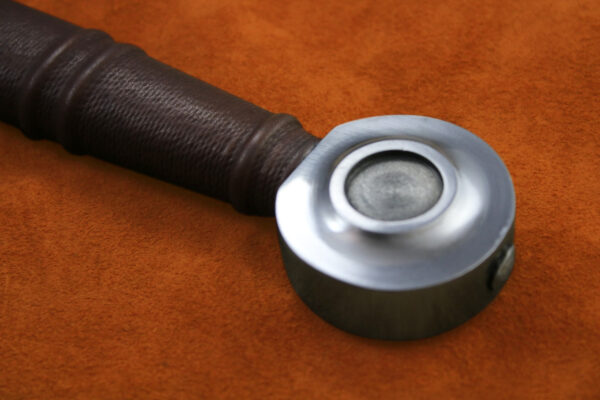 The “Waylander” battle ready sword is inspired by the spirit of David Gemmell’s Waylander series, a gripping tale of magic, battles and revenge. The blade is reminiscent of a standard arming medieval sword design, straight and double edged with a single fuller. The wheel pommel is recognizable on many classic pieces as well. What sets this battle ready sword apart is the unique guard – a fierce, claw-like design that is evocative of the darkness that covers Waylander’s life and heart. The design is finished by a brown leather that forms the grip and covers the handmade wood core scabbard.

Even people who are not fans of fantasy literature as a genre are aware of its great authors. Tolkien, George R. R. Martin, classicists like Robert E. Howard, even J. K. Rowling are well-known names in homes that do not own a single copy of any of their books. Television and film have elevated these authors even beyond the reach of their novels, and the fantasy fiction business has never been better. Some fantasy authors, though, never quite reach the heights of the creator of the Lord of the Rings – but have a dedicated following and expertly crafted books nonetheless. Of these authors, David Gemmell stands well above many others.

Born in 1948, David Gemmell was for most of his life a journalist. He might have remained a journalist had it not been for a brush with death in his 30’s. Diagnosed with cancer, Gemmell felt crushing anxiety and despair. He externalized these feelings into his writing, writing a manuscript about a fortress under assault by an all-consuming evil hoard. The cancer scare turned out to be a misdiagnosis, and Gemmell shelved the manuscript for nearly a decade until a close friend urged him to try and have it published. The novel would become Legend, and would establish Gemmell as a solid contender in the genre.

David Gemmell would go on to write thirty books in the world in which Legend was set and elsewhere, and became especially famous in his home country of Britain. Unfortunately, he passed away at the age of 57, but left a legacy that influences the genre with his particular flair to this day. In fact, the David Gemmell Legend Award – given to rising stars in fantasy fiction – is an actual, honest-to-goodness axe. One of Gemmell’s most popular sets of novels is the Waylander series, named for the main character.

Waylander is an assassin with a tortured past, having spent nearly two decades tracking down and killing the murderers who killed his beloved family. Now, he works as a blade-for-hire of unparalleled skill and questionable morals. As the books begin the land of the Drenai is in peril; their beloved king has been murdered and invaders have come to wipe their people off the face of the earth. The only hope the Drenai have is the assassin Waylander, who alone has the skill and the will to defeat their foes. But how can they rely on him when he is also the man who betrayed and murdered his king?

Like many of Gemmell’s characters, the Waylander books feature strong themes of tortured heroes and redemption. How could we not make a sword honouring this character? The Waylander is based on the battle ready swords of the 14th century. The tapered blade, drawn with a ¾ length fuller, offers an excellent point of balance (P.O.B) to this one handed medieval sword. While the sword has a traditional Norman wheel pommel, the guard (being inspirational in nature rather than historical) gives the medieval sword it’s unique character and essence.

The “Waylander” sword is inspired by the spirit of the anti-hero. The blade is reminiscent of a standard arming medieval sword design, straight and double edged with a single fuller. The wheel pommel is recognizable on many classic pieces as well. What sets this battle ready sword apart is the unique guard – a fierce, claw-like design that is evocative of the darkness that covers Waylander’s life and heart. The design is finished by a brown leather that forms the grip and covers the handmade wood core scabbard.

Rated 4.91 out of 5
650.00 USD – 810.00 USD
Select options
We use cookies on our website to give you the most relevant experience by remembering your preferences and repeat visits. By clicking “Accept”, you consent to the use of ALL the cookies.
Cookie settingsACCEPT
Manage consent