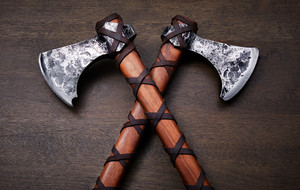 Through the course of human history, daily utility tools have long been pressed into service as weapons of war. Viking Axes are no exception. Modified from its original form, as a daily agricultural tool, the Viking Axe shifted as a weapon of war during the golden age of Viking raids. Modified to be lighter, narrower and ultimately swifter, the Viking Axe became a fierce weapon capable of delivering devastating blows against shields, blades, and helms. No longer designed for purely mundane tasks, the Viking Axe was reborn as an assault weapon.

Darksword Armory’s collection of Viking Axes are faithfully reproduced to feel, handle, and perform as the originals. Hand-forged from wrought iron and hardened, our axes are sturdy, resilient and built to perform under the strictest environments. Catered to individual preference, each Viking Axe can be ordered dull or sharp, according to intended use.