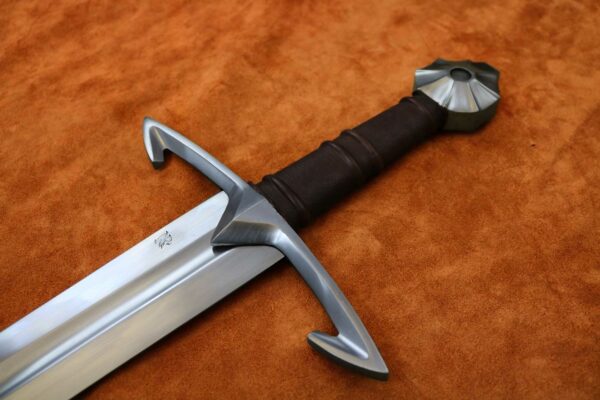 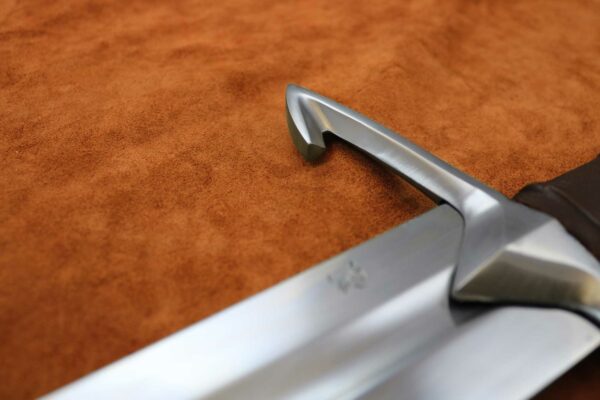 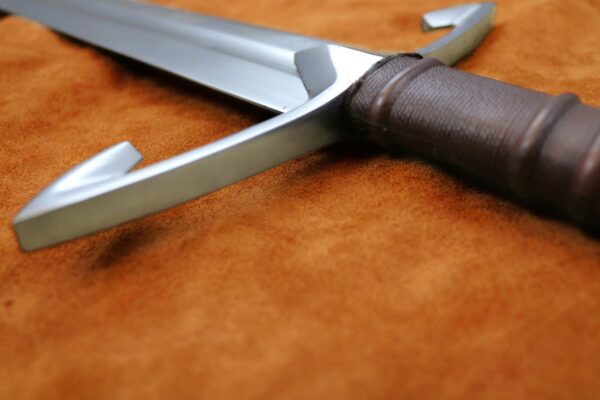 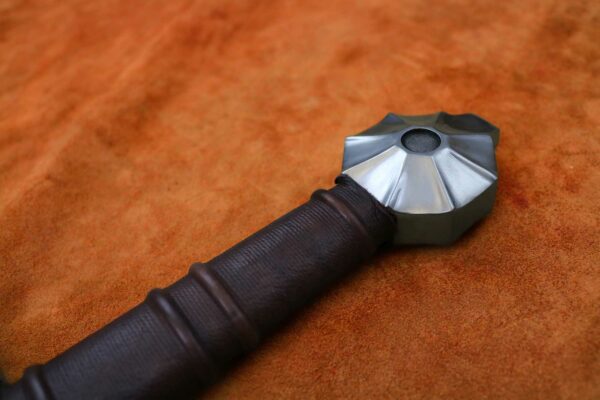 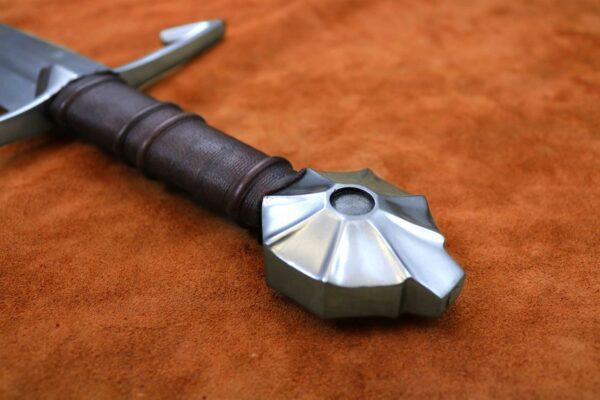 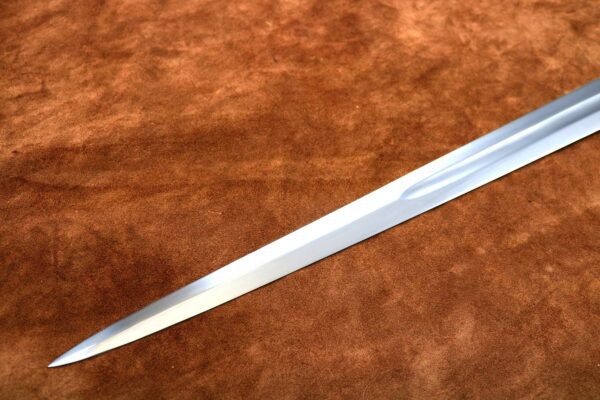 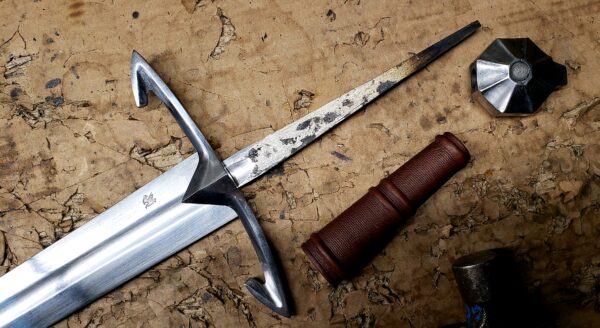 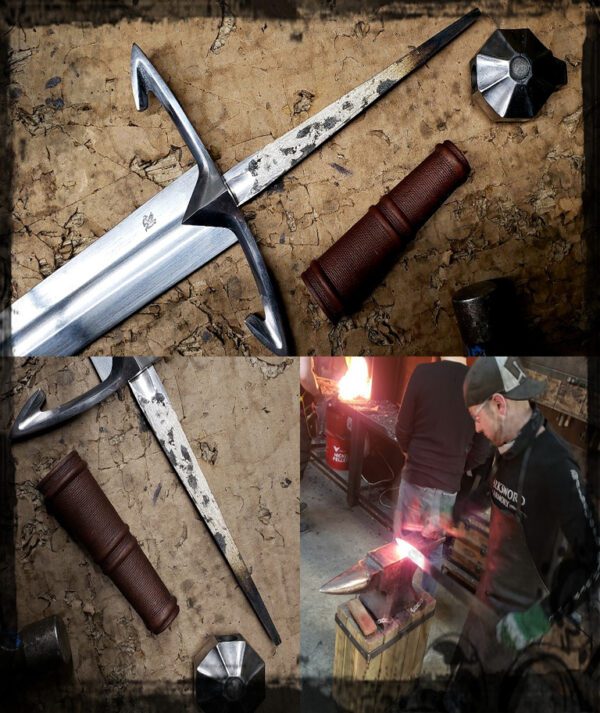 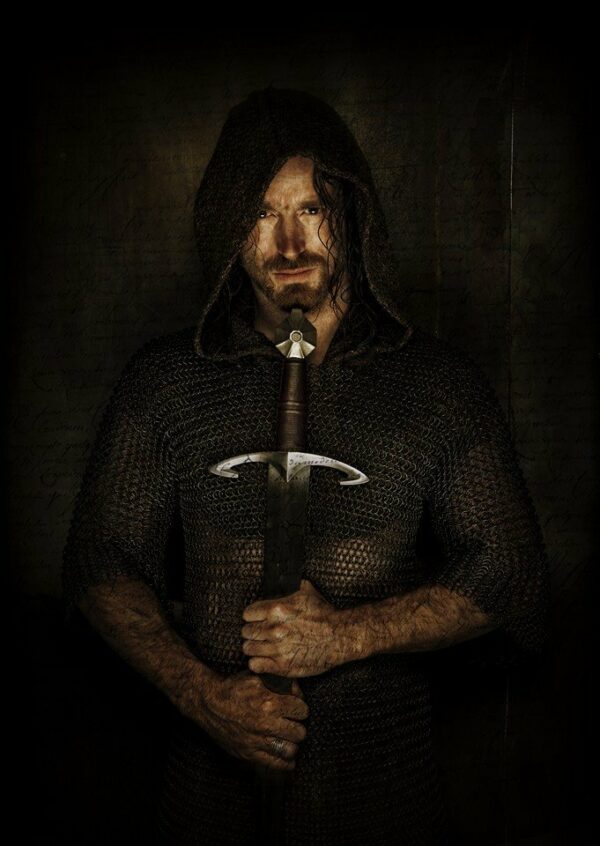 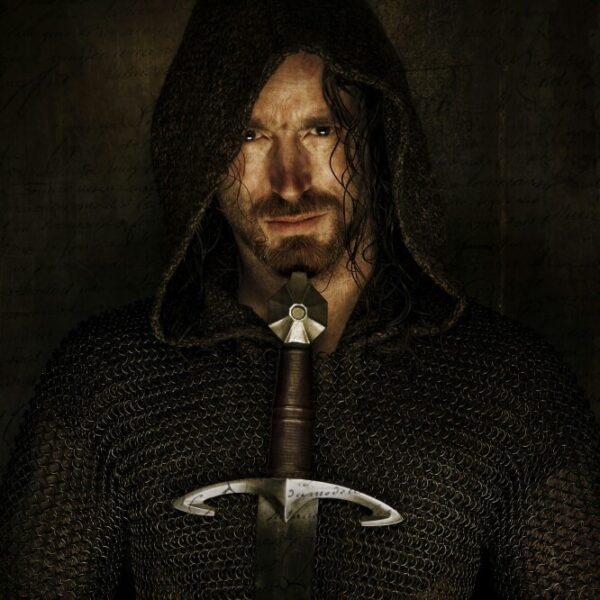 In history and literature, a Black Knight is a mysterious warrior who hides their identity in order to disguise their motives and allegiance. The Darksword Armory Black Knight Sword is a nod to this literary and historical character, blending historical design with a fantasy flare. The straight, tempered, double-edged blade is based on those swords most often carried by the mounted knights of the medieval period. With full tang construction this sword is fully functional, and has been expertly forged and balanced to be an effective and deadly cutting weapon.

More information on the Black Knight Sword, and on the historical and fictional characters that inspired it, can be found below.

When people from around the world think of knights in shining armor, they often envision similar pictures – a mounted warrior in bright shining armor carrying a sword or lance, often with a colorful shield emblazoned with medieval symbols. The symbols on a knight’s shield were his heraldry, a complex set of designs (also called armory or armorial bearings) that detailed his origins and allegiance. Knights would wear the healdric devices of their lords and so represent them – in battle, in the tournament, and abroad in war or crusade. The wearing of heraldry on one’s shield is strongly associated with a knight’s honor and chivalric virtue.

By contrast, a Black Knight is someone who does not display heraldry. For reasons of his or her own, the Black Knight adopts a set of unmarked arms (by literary tradition, typically blacked armor, tunic, and shield at least) and refuses to disclose their identity. In many pieces of classical and modern fiction the Black Knight is therefore a villainous character, unwilling to stand behind their actions but defiantly standing in the path of the hero.

While some historical figures (notably Scottish knight James Stewart) took the title of “The Black Knight,” the trope itself may have originated with Arthurian legend. In Sir Thomas Malory’s unparalleled 15th-century classic, Le Morte d’Arthur, the character of the Black Knight appears and faces Sir

Gareth. Gareth, nephew of King Arthur and Knight of the Round Table, has the story of his journey to become a knight detailed in Le Morte d’Arthur – during which time he defeats the Black Knight as well as several other villainous knights on his journey. Sir Gareth remains a major character in the story until his death at the hands of Sir Lancelot during Lancelot’s brief rebellion against King Arthur, though the story of Gareth overcoming his foes (including the Black Knight) remains a major feature of the book.

Several other Black Knights appear in different versions of Arthurian legend, and we would be remiss if we did not include the most famous version here. In 1975 comedy film Monty Python and the Holy Grail, King Arthur (played by Graham Chapman) faces a fearsome Black Knight (played by John Cleese) guarding a “bridge” (played by a short wooden plank). The ensuing swordfight is famous even among those who do not typically enjoy the British comedy troupe’s humor, as King Arthur cuts off the Black Knight’s limbs one by one while the Black Knight comically refuses to acknowledge the severity of his wounds. The scene must be seen to be appreciated, so we have linked it here will all respect to the filmmakers and encourage everyone reading to purchase or rent a copy of the film.

Inspired by Black Knights both real and fictional, The Black Knight Sword is a highly unique weapon. The design of the weapon was inspired by E.A. Christensen’s famous sketch, found on p. 121 of Oakeshott’s “Record of the Medieval Sword.” The distinctive pommel married to the classic double-edged, single-fullered blade makes this a knightly weapon of note. While preserving the historical essence of the blade and pommel, our rendition of this battle ready sword was given a fantasy appearance with its morbid and savage-looking crossguard.

Structurally, the Black Knight Sword is built to our usual standards of strength and resilience. The sword’s blade is responsive, well balanced, tough yet flexible. The sword’s light weight and balance make this medieval sword a potent thrusting weapon. The dual tempered 5160 steel blade is solid and extends though the grip with a full tang. Classically styled with the typically close quarter blades of the 14th and 15th C, the Black Knight is similar to many swords that would have been carried by mounted noble-born warriors. What sets it apart beyond the stylistic guard is the richly decorated pommel, which crowns an equally embellished leather wrapped handle.

Inspiring an essence of strength and heroism, the Black Knight sword is a must even for the most discriminating collector.

Rated 5.00 out of 5
510.00 USD – 655.00 USD
Select options
We use cookies on our website to give you the most relevant experience by remembering your preferences and repeat visits. By clicking “Accept”, you consent to the use of ALL the cookies.
Cookie settingsACCEPT
Manage consent