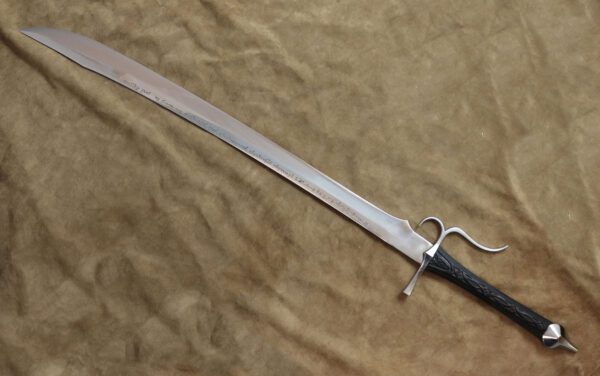 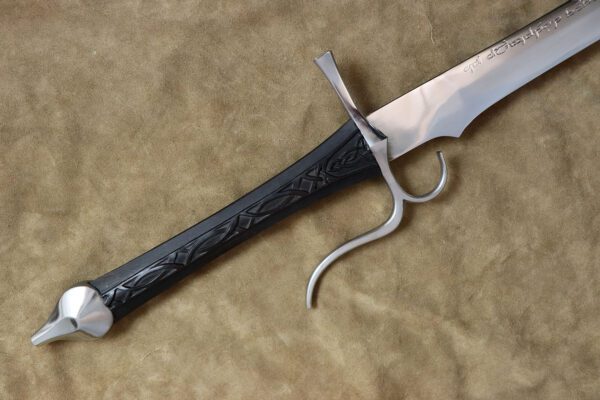 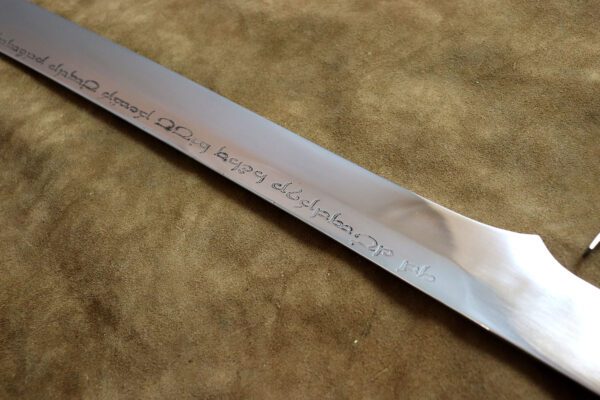 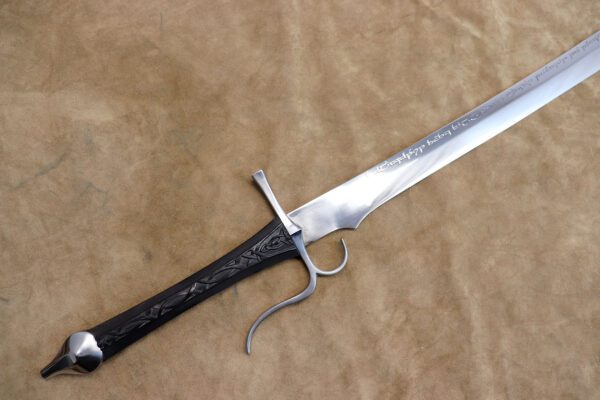 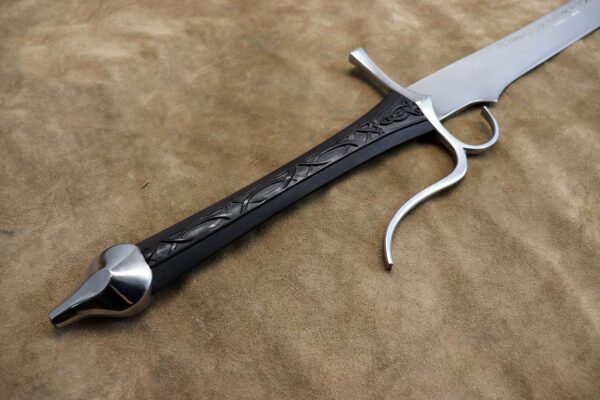 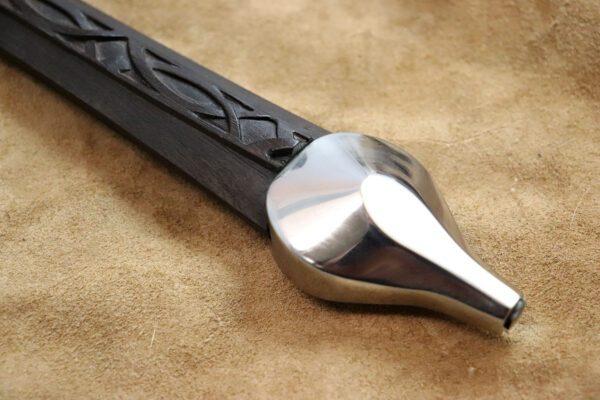 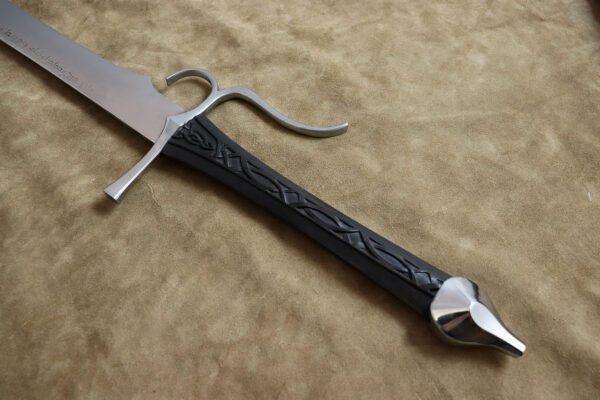 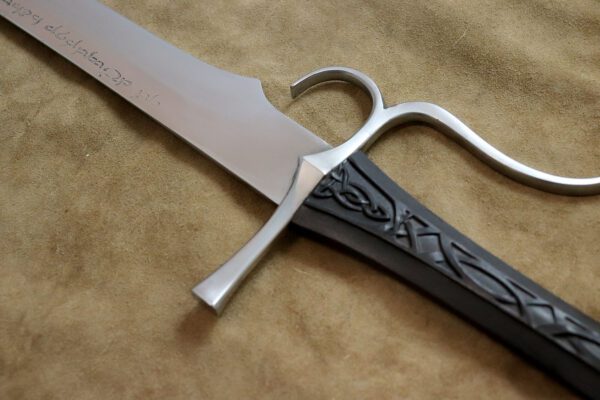 Inspired by J.R.R. Tolkien’s The Silmarillion, the Darksword Armory Ringil is a European-style sabre with a fantasy twist. In the ancient history of Middle Earth, Ringil was carried by the elven High King Fingolfin, the most valiant warrior who ever lived. One of the few named weapons in Tolkien’s works, Ringil was used by Fingolfin in his epic single combat against the Dark Lord Morgoth. This deadly Elven blade gave the Dark Lord wounds from which he never recovered. Our version of Ringil is single-edged, as were many of the Elven weapons of the Second Age depicted in the Peter Jackson Fellowship of the Ring prologue. A hand-and-a-half sabre, this sword is similar to 16th century Swiss designs – with a fantasy twist. With excellent handing, a carved hardwood handle, and Elven script on the blade this sword sits comfortable at the intersection of deadly and beauty.

When J.R.R. Tolkien was writing The Silmarillion, he had several goals. One of them was to write an alternative, fantasy-laden history of Europe (in general) and Britain (in specific). Another was to bring to life many of the rich stories that grew in his own mind as he was immersing himself in ancient Anglo-Saxon texts. But most of all he wrote the book, and all his books, to provide a context for the Elven languages he invented. And in order to do that, he had to write an extensive history full of great characters, great deeds, and fell dangers. 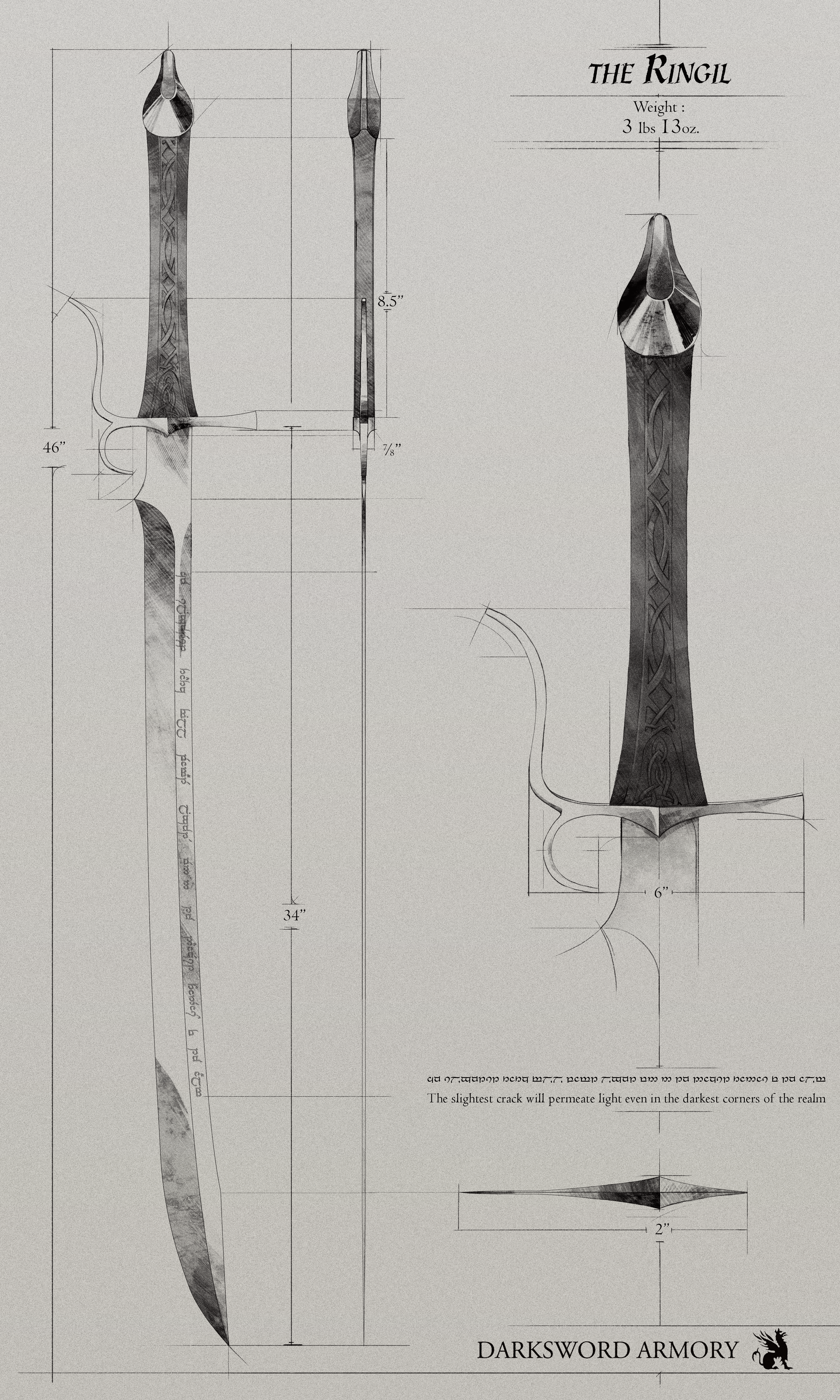 Among earliest of these stories are the tales of the first Elves, who awoke in Middle Earth when only stars lit the world. In the days before the Sun and the Moon Middle Earth was watched over by the Valar, gods of Middle Earth who served the Creator Iluvatar. The Valar assisted in the creation of the world and waited for the Children of Iluvatar (Humans and Elves) to awaken. However, they were not alone – also in Middle Earth was Morgoth, a dark Valar who wished not to serve but to rule. The Valar lived far to the West on the great Ilse of Valinor, whereas Morgoth was in hiding in Middle Earth.

When the first Elves awoke they called themselves the Quendi – meaning the Speakers, as they were the only beings they knew of who spoke. When the Valar, gods of Middle-Earth, realized that the Elves had come into being they knew that they would be vulnerable to danger. Indeed, when Morgoth realized the Elves had awoken he set out to capture as many of them as he could, using his dark magics to twist them into becoming Orcs. The Valar responded by sending an envoy to invite the Elves to come and dwell with them in Valinor. Many Elves joined them on the long journey to Valinor including Finwë, who would become Lord and King of the group of Elves known as the Noldor. Finwë was father to a number of powerful elves including Fëanor, creator of the Silmarils. When Finwë was killed by Morgoth Fëanor and his brothers Fingolfin, Finarfin, and Findis swore revenge and followed Morgoth back to Middle Earth. Of these brothers Fingolfin was the greatest in terms of strength of arms and valour, and after Fëanor’s death Fingolfin would become High King of the Noldor. Fingolfin would lead the Nolder to lay siege to Morgoth’s fortress of Angband for over four centuries, as well as expand the power and control of the Elves in Middle Earth.

If the siege had held Middle Earth may have had lasting peace, but during the intervening four hundred years Morgoth was not idle. In a day known as the Dagor Bragollach or Battle of the Sudden Flame, Morgoth sent forth the full force of his strength – Balrogs, dragons, and uncountable numbers of Orcs

poured out, while mountains cracked and spewed forth vast rivers of magma. Whole kingdoms were wiped off the face of the earth, and while Fingolfin’s fortress survived the might of the Noldor had been brought to ruin. The loss of his people was too much for him to bear, and the greatest warrior of all the Elves went to war.

Now news came to Hithlum that Dorthonion was lost and the sons of Finarfin
overthrown, and that the sons of Feanor were driven from their lands. Then
Fingolfin beheld (as it seemed to him) the utter ruin of the Noldor, and the defeat
beyond redress of all their houses; and filled with wrath and despair he mounted
upon Rochallor his great horse and rode forth alone, and none might restrain
him. He passed over Dor-nu-Fauglith like a wind amid the dust, and all that
beheld his onset fled… Thus he came alone to Angband’s gates, and he sounded his horn, and
smote once more upon the brazen doors, and challenged Morgoth to come forth
to single combat. And Morgoth came.

That was the last time in those wars that he passed the doors of his stronghold,
and it is said that he took not the challenge willingly; for though his might was
greatest of all things in this world, alone of the Valar he knew fear. But he could
not now deny the challenge before the face of his captains; for the rocks rang
with the shrill music of Fingolfin’s horn, and his voice came keen and clear
down into the depths of Angband; and Fingolfin named Morgoth craven, and
lord of slaves. Therefore Morgoth came, climbing slowly from his subterranean
throne, and the rumour of his feet was like thunder underground. And he issued
forth clad in black armour; and he stood before the King like a tower, iron-
crowned, and his vast shield, sable unblazoned, cast a shadow over him like a
stormcloud. But Fingolfin gleamed beneath it as a star; for his mail was overlaid
with silver, and his blue shield was set with crystals; and he drew his sword
Ringil, that glittered like ice.

From The Silmarillion, Chapter 18 – OF THE RUIN OF BELERIAND AND THE FALL OF FINGOLFIN

The battle of Fingolfin and Morgoth is one of the greatest scenes in the Silmarillion, and perhaps all fantasy fiction. The fury and the despair, the triumph and the tragedy mingle together to create a perfect moment; we feel Fingolfin’s rage and anguish, and Tolkien’s beautiful prose as he describes the fight is not just text – it’s art. We can see clearly in our minds eye the terrifying sight of Morgoth towering over the High King, who shines bright in the darkness with a mighty sword in his hand.

The Darksword Armory Ringil is an Elven sword of great renown. The long, single-edged blade is similar to Swiss designs of the 16th century with a stiff back and a curved tip, though our Elven sword had an exotic flared tip. The curving steel guard includes a finger guard, allowing the wielder to safely wrap a finger to improve their grip. The hardwood grip has been carved with Celtic knotwork reminiscent of the flowing designs of the Elves, which – when paired with the teardrop pommel – provides a striking contrast to the bright steel of the rest of the weapon. It is not hard to imagine this sword glittering like ice in the darkness.

Hand-and-a-half or bastard sabres are known for their agile handling, and the Ringil is no exception. This sword has significant blade presence, and certainly feels like it could deal a mortal wound to a Dark Lord. Despite this, the long handle and solid pommel bring the point of balance down to a manageable range, allowing this sword to flow effortlessly through drills or in heated motion. The blade has no fuller, which allowed us to include an Elven inscription in the Tengwar script: “The slightest crack will permeate light even in the darkest corners of the realm.” This hopeful message exemplifies the mission and the burning purpose of Fingolfin and the mighty Noldor kingdoms.