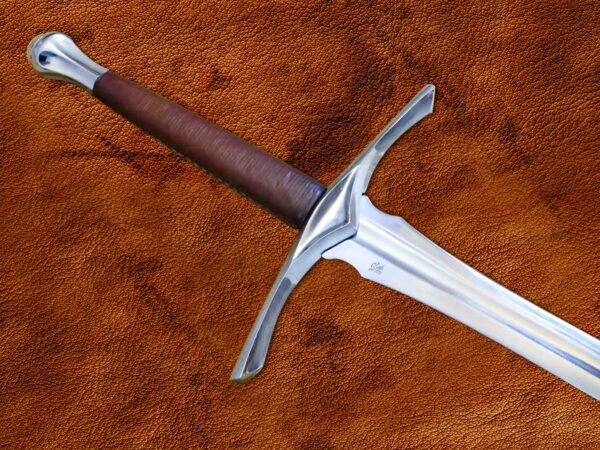 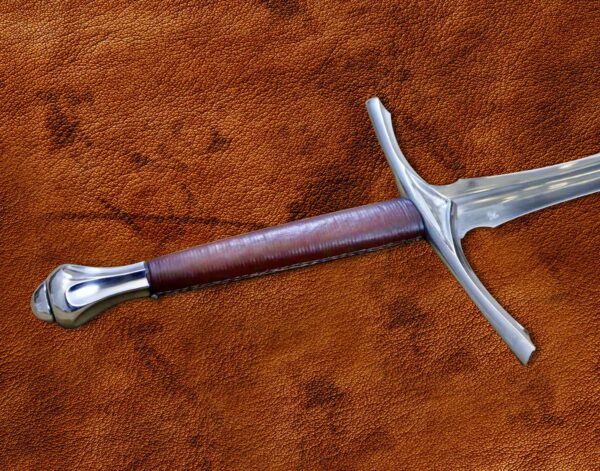 In  J.R.R Tolkien’s books, Elves are powerful beings, whose grace, beauty and skill are all too often overshadowed by their hubris. The Elves fight against the Dark Lord for a millennium, sometimes winning decisive battles, other times bring brought to the brink of extinction. Only their strength that burns in their hearts seems to help them carry the day; their strength and the weapons of power that they create. Inspired by Glamdring, the elven blade carried by Gandalf in the Lord of the Rings films, the Sage fantasy medieval sword is a battle ready sword crafted with Tolkien’s realm in mind.

“They are old swords, very old swords of the High Elves of the West, my kin. They were made in Gondolin for the Goblin-wars. They must have come from a dragon’s hoard or goblin plunder, for dragons and goblins destroyed that city many ages ago. … This, Gandalf, was Glamdring, Foe-hammer that the king of Gondolin once wore. Keep them well!”

Elves are mythical and magical creatures in many forms of fantasy literature, and nowhere do they receive more attention than in J.R.R. Tolkien’s writings. The firstborn Children of the creator Iluvatar, the Elves’ long history winds through countless triumphs and tragedies written as only Tolkien could write. They awoke under the stars of Middle Earth in a time before the sun and the moon existed, and were beloved of the Valar – the gods of Middle Earth. Because of their great love for the Elves the Valar gathered a large number of them and brought them to the undying land of Valinor across the sea, keeping them safe from harm.

Alas, the Valar could not keep the Elves safe from their own foolish pride. While in Valinor the mighty craftsman Fëanor forged the holy Silmarils, gems of surpassing beauty, using the light that the Valar had brough into the world. Even though he had not created this light Fëanor was haughty about his work and denied them to any but his own hand. This created a deep divide between Fëanor’s allies and those loyal to the Valar, and into that divide crept Melkor the dark Valar.

Melkor stole the Silmarils and slew Fëanor’s beloved father, then fled to his fortress back in Middle Earth. What followed was centuries of bloody battles as first Fëanor and then his sons and their houses pursued Melkor and sought to strip him of the Silmarils that they believed were theirs by right. As the battles dragged on the sons of Fëanor and their allies began to set up kingdoms of their own to rule, and of these kingdoms none were so beautiful, so powerful, and so glorious and Gondolin.

Ruled by Turgon, nephew of Fëanor and High King of the Elves known as the Nolder, Gondolin was a city hidden deep in the mountains and accessible only by concealed paths. The city was

built in secret as the last bastion of safety for the Noldor, to be their seat of power from which to wage war upon the forces of darkness. The stories about Gondolin and its eventual discovery and destruction by the forces of Melkor are far too many to be included here (see The Silmarillion for more details), but what can be told is that from the forges of Gondolin came many mighty weapons of great power – and of these weapons, perhaps none are as famous as Glamdring the Foe Hammer.

A long sword of great beauty, Glamdrin belonged to the ruler of Gondolin. Turgon wielded Glambring in many battles including the Battle of Unnumbered Tears where the Elves and their allies were routed thanks to the treachery of men. Turgon likely used the sword as well during the fall of Gondolin, after which it became lost for thousands of years and might have passed out of Tolkien’s lore altogether. However, Glamdring actually makes its first appearance for most readers in the pages of The Hobbit, when Gandalf the Grey finds it in a troll-cave along with other Elven blades and treasures. Gandalf carries the sword for the rest of his adventures, and it likely accompanied him when he left Middle Earth and returned to his masters in Valinor.

A deep respect for Tolkien and his works was maintained during the creation of this battle ready sword. The smooth and subtle curves of the blade, guard and pommel were meant as a reflection of wisdom and understanding while the downward looping guard flows towards the curves of the blade in a form of dance between both parts. Despite this seemingly fragile aestheticism, this medieval fantasy sword is nothing but stern. It’s 2″ wide blade delivers destructive cutting blows with a very sharp tip, leading to equally devastating thrusts. The Sage fantasy sword is not only an eye catcher, it is also a definite force on the battle field.