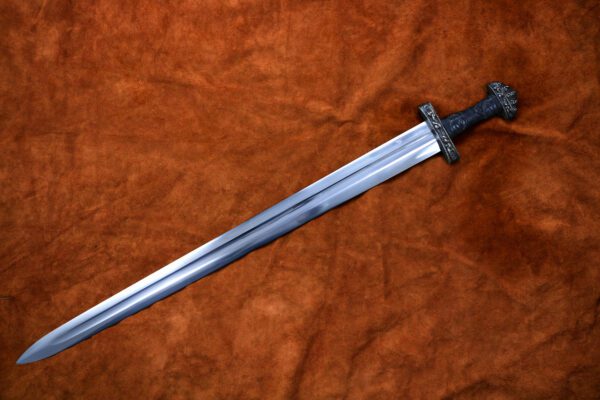 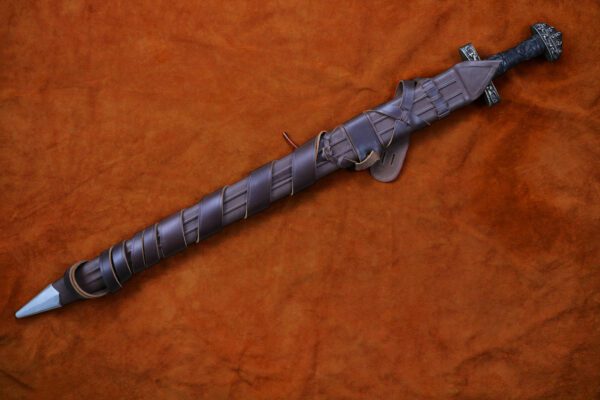 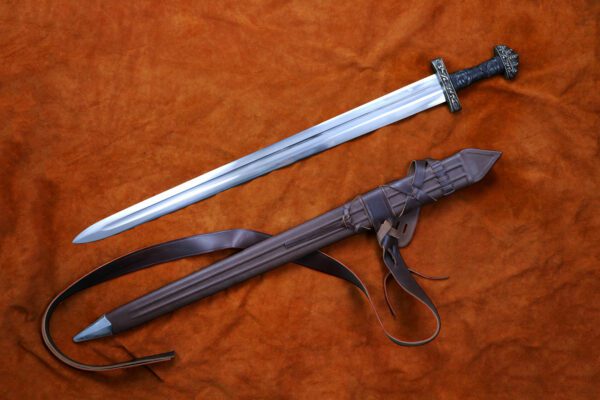 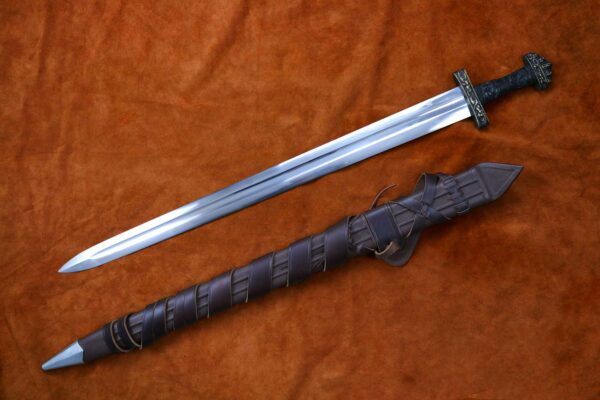 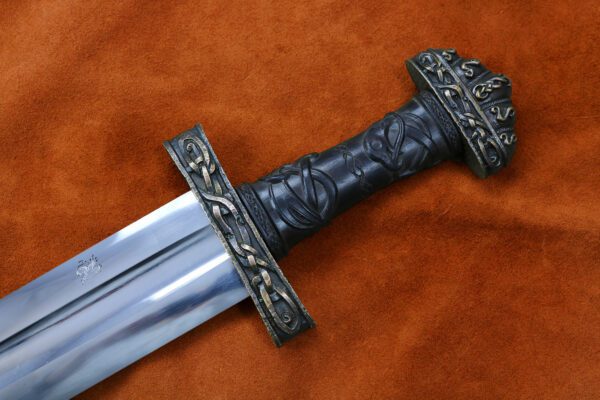 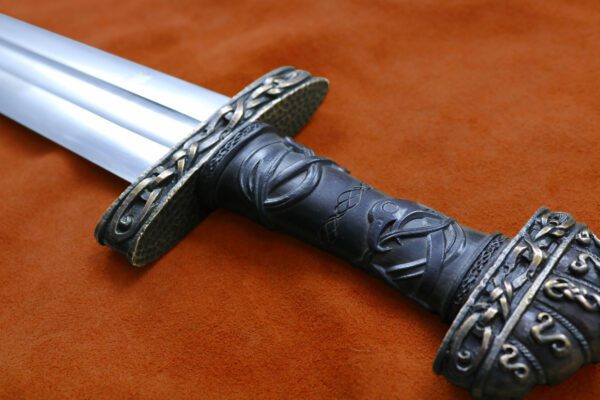 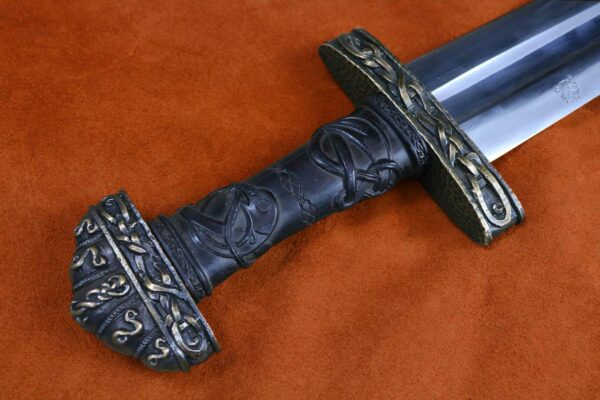 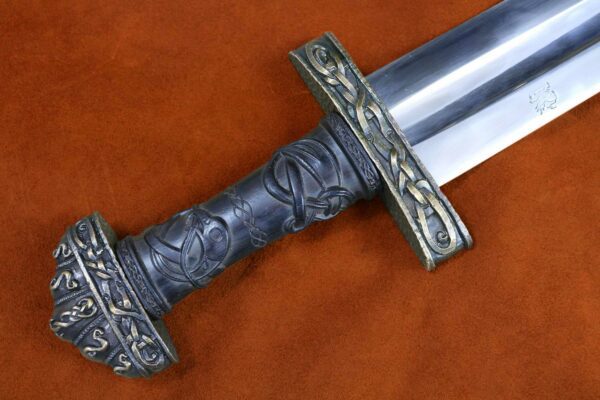 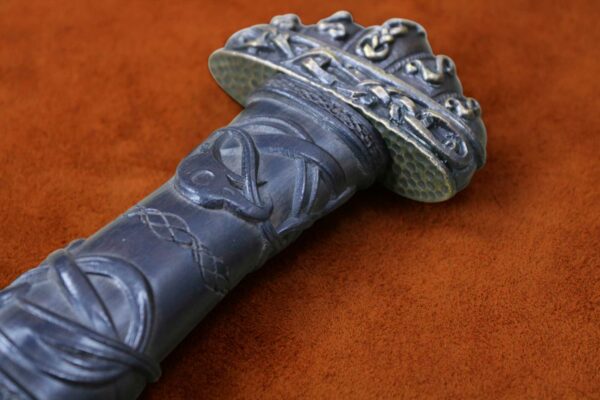 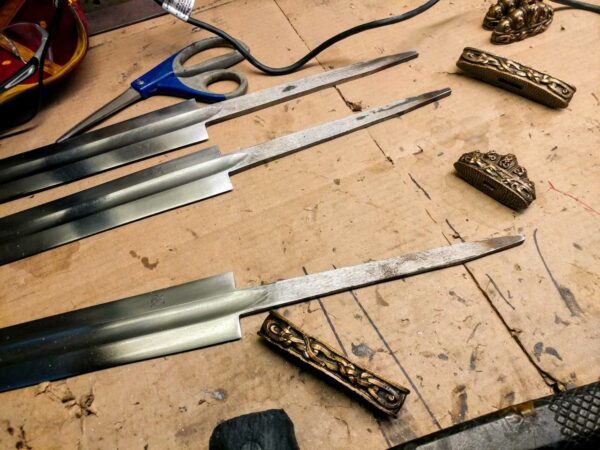 Skilfully crafted from 5160 High Carbon steel. The Oslo Viking Sword is an inspiring Medieval weapon. Authoritative, vibrant and rugged, the Oslo Viking sword is well balanced and a fierce Viking weapon of choice.  Inspired by the remains of a 10th C. Viking hilt with elaborated serpentine motifs, the sword remains faithful to its historical counterparts.

With the sword at the core of Viking history, we engineered the Oslo Viking sword for the most brutal use. Vivid and resilient, the Viking sword is built to last ! (read more…)

At the center of this fierce nomadic culture, stood the Viking sword. No object was praised more among the Vikings than the sword. While other Viking weapons, such as the axe or spear, were important mainstays of Viking martial life, the sword was viewed with special reverence – not only for its utility in combat, but also due to the incredible skill involved in their construction. Smithing the long, tempered blades with the technology available at the time was tremendously difficult, and the evolution of the Viking sword is a testament to the Viking smiths’ steady growth in expertise.

This evolution was first described by Dr Jan Petersen, a Norwegian archaeologist who lived in the late 19th and early 20th centuries. Petersen studied the development of Viking sword smithing and published his results in his dissertation, “The Norwegian Viking Swords: A Typological-Chronological Study of Viking Age Weaponry.” This revolutionary typology was the first of its kind, and laid the groundwork for later typologies (such as Ewart Oakeshott’s typology of the medieval sword).

As in the later examples of Petersen’s typology, the hilt is the biggest differentiating factor – and while crafting the solid bronze guard and pommel, the essence of the Viking heritage was carefully honored. Norse knotwork – a consistent feature of Viking culture – is skillfully imbued into the bronze guard using the lost wax process with designs are based on historical examples. The grip is meticulously engraved solid ebony. 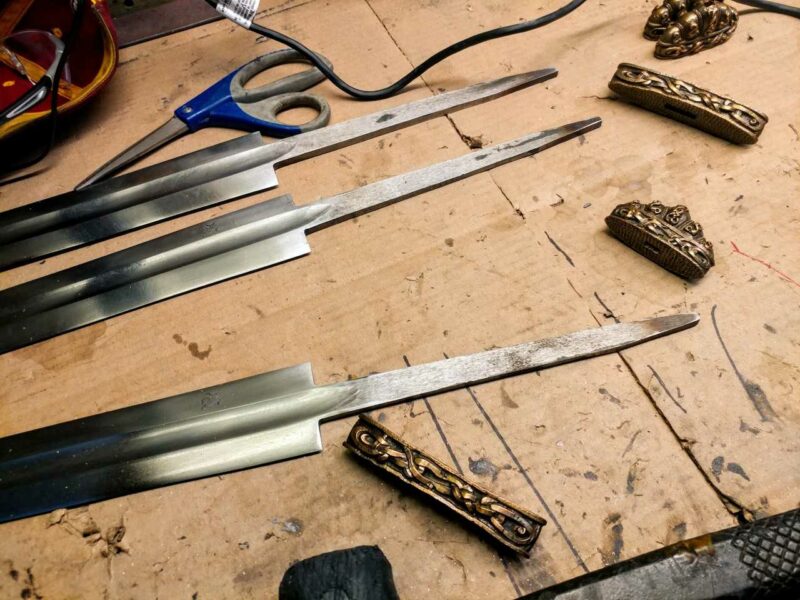 Rated 4.75 out of 5
580.00 USD – 710.00 USD
Select options
We use cookies on our website to give you the most relevant experience by remembering your preferences and repeat visits. By clicking “Accept”, you consent to the use of ALL the cookies.
Cookie settingsACCEPT
Manage consent