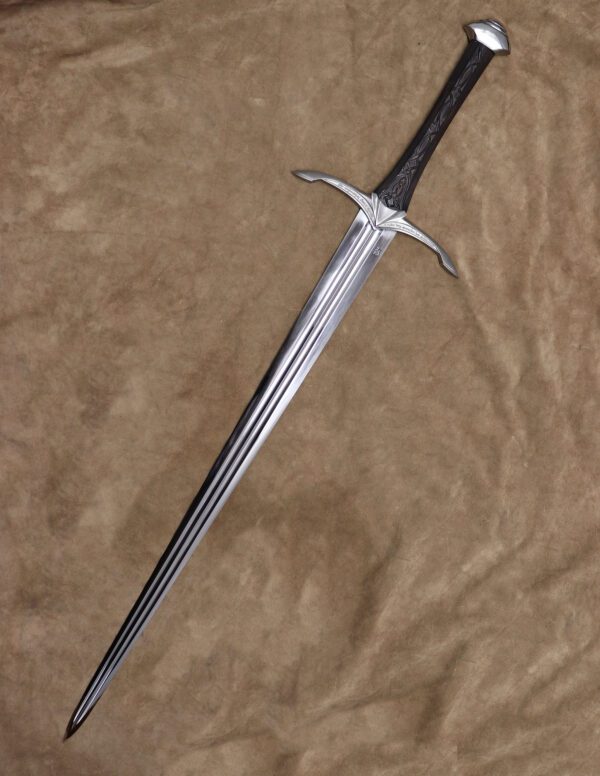 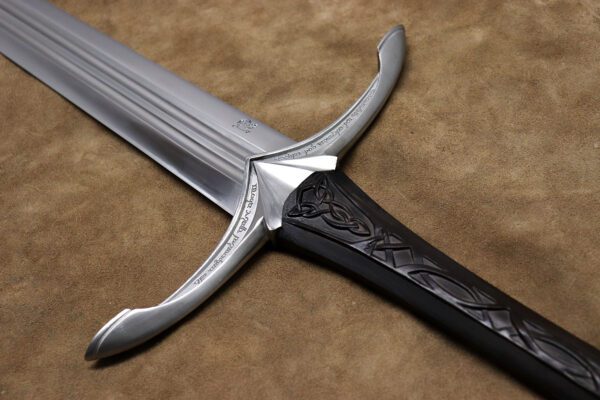 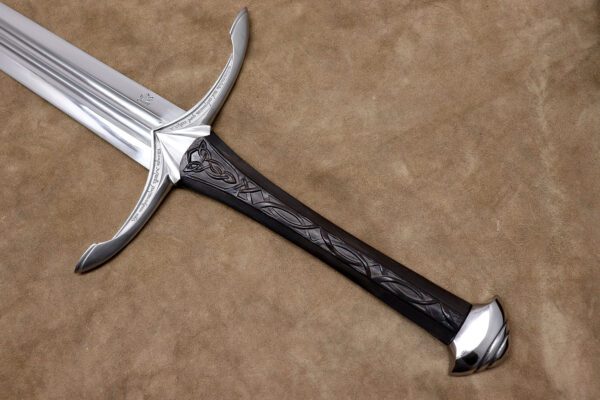 “There is malice in this sword. The dark heart of the smith still dwells in it. It will not love the hand it serves, neither will it abide with you long.”

The Gurthang is a sword inspired by a dark fate. In J.R.R. Tolkien’s The Silmarillion, the Gurthang is a meteoric iron sword originally forged by the Dark Elf Eöl but made most famous in the hands of the tragic hero Túrin Turambar. Unlike other swords in Toliien’s work Gurthang was said to have a personality, to rejoice in war and lament over the blood of the innocent. Countless orcs fell before its edge, and it was even used to slay the Father of Dragons. Our version of Gurthang is a two-handed longsword with a 32” double-fullered blade. The curved guard with elven script and black hardwood grip – carved with elegant knotwork – show the weapon’s Elven inspired heritage. The long handle and heavy pommel provide excellent leverage and bring the point of balance down close to the guard, giving this sword a lively presence. Holding it, one feels as though they too could face off against a dragon.

“The sword Anglachel was forged anew for him by cunning smiths of Nargothrond, and though ever black its edges shone with pale fire; and he named it Gurthang, Iron of Death.”

From The Silmarillion, Chapter 21 – OF TURIN TURAMBAR 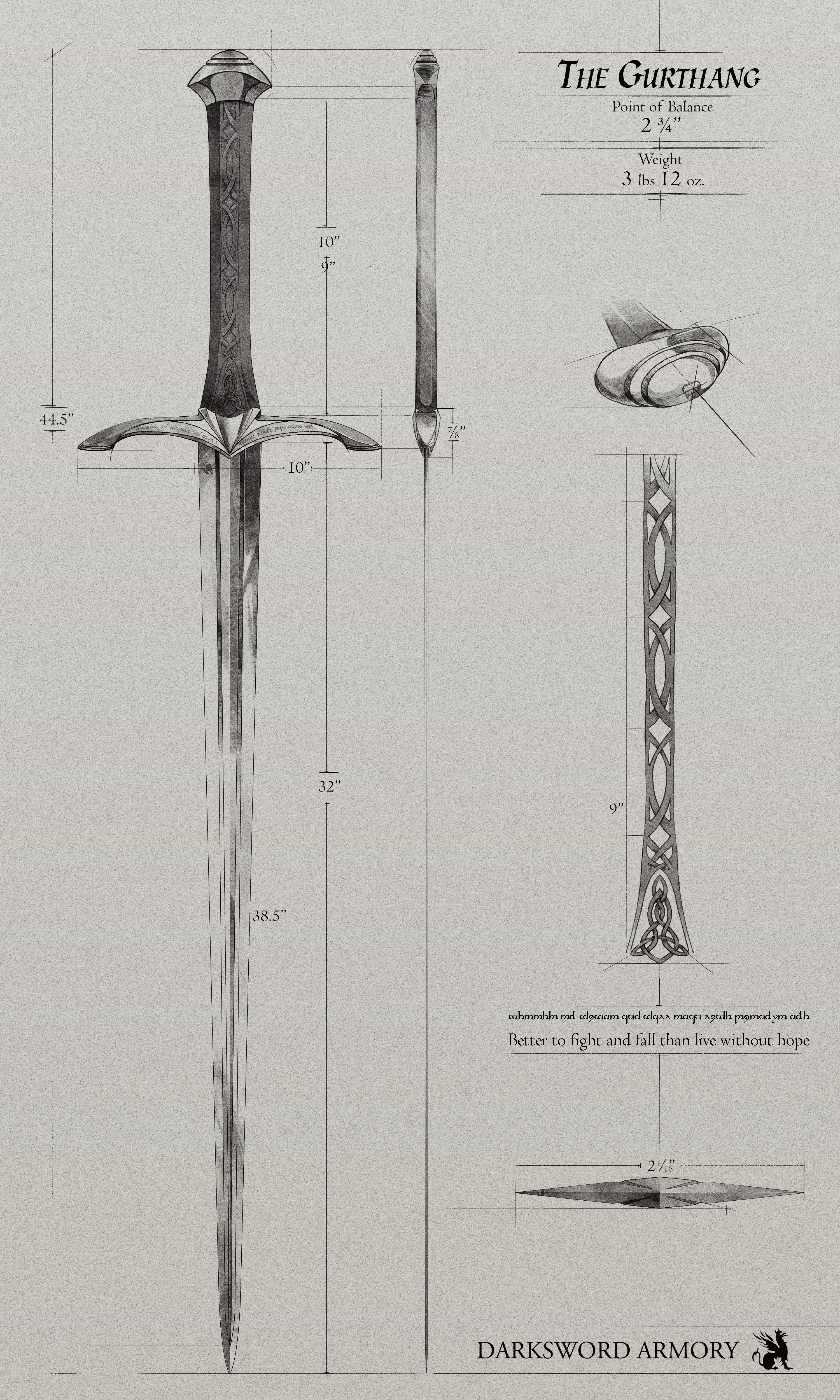 In the histories of Middle Earth, the First Age was a time of turmoil and war. For centuries the Dark Lord Morgoth was under siege in Angband, and the Elves kept watch and grew in power. Many great cities were built and alliances were forged, and though the days of Fëanor (greatest of the Elven smiths) were long past there were now new masters of anvil and hammer. Of these new masters Eöl, born in Doriath during the siege of Angband, was without peer though proud and covetous. Among his many feats Eöl created a metal known as galvorn, which was black as jet yet harder and more supple than steel. He made a suit of armor of the substance which he wore ever after; that plus his brooding demeanor caused him to be known as the Dark Elf. During this time he also forged the twin swords Anguirel and Anglachel from meteoric iron, and gave Anglachel to Thingol, King of Doriath. Anglachel was recognized to have a dark and violent spirit within it, similar to the heart of its maker. Indeed, Eöl lived a relatively short life for an Elf – he was sentenced to death for murdering his wife when she and their son attempted to flee his wrath and control.

In the days after Morgoth broke the Siege of Angband – a battle known as the Dagor Bragollach (“Battle of Sudden Flame”) – countless numbers of Elves were slain, and the survivors fought desperately to keep from being overwhelmed. Thingol, as many of the Elf lords, allied himself with humans; specifically, Men from the House of Hador. Had Thingol known that this noble House was under a curse by the Dark Lord to have all they attempted to do for good turn to ill himself he may have chosen differently – but he did not. Thingol even chose to foster the son of his human friend Húrin, the boy Túrin Turambar. Túrin grew in strength and renown, and Thingol loved his as his own – but Túrin was resented by some of the Elves of Doriath. Tragically, one an occasion when Túrin defended himself against assault by one of Thingol’s subjects the Elf was accidentally killed, and before he could receive judgement or mercy Túrin went into exile in shame.

Having left the Elves behind Túrin fell in with a company of bandits and men of ill-repute – however, his time among the Elves had not left him idle. Túrin rose to the head of this company and forged them into a fighting force that defended the innocent humans and brought terror and death to the roving bands of orcs. While Túrin attempted to carve out a new destiny for himself Thingol dearly missed his adopted son and grieved his going out from Doriath. When Beleg Strongbow, an Elven warrior and dear friend of Túrin, asked leave of Thingol to seek out his friend Thingol not only granted him leave but gave him Anglachel to assist in his quest. Beleg joined Túrin and his band, and both felt great joy at being reuinited. They fought side by side, and all would have been well had Túrin not been betrayed by one of his band and captured. Beleg hunted down the orcs who took his friend and came upon Túrin in a moment of great need, lying tortured and senseless in the orc’s camp. Beleg rejoinced to have found his friend alive and drew Anglachel to cut his bonds – but the curse of Morgoth was still upon the heir of Húrin. The Dark Elf’s blade slipped in his hand and Beleg lay a shallow cut on Túrin’s foot. Roused to sudden wakefulness, Túrin leaped up and seized the sword, striking down his friend. When he realized he had killed his dearest friend and ally Túrin was inconsolable, and fled with the sword to the underground Elven city of Nargothrond.

In Nargothrond Túrin hid his true name and nature from the Elves, though they recognized him as a warrior of peerless skill and power. He had Anglachel reforged and named the new weapon Gurthang, “Iron of Death,” and through his adventures with this sword he became known as The Mormegil (“The Black Sword”). Gurthang, like Anglachel from which it was made, seemed to carry with it a dark and battle-hungry spirit. For years Túrin used Gurthang to carve a swath of destruction across Morgoth’s forces, even slaying Glaurung the Father of Dragons in his final battle. As the story of Túrin Turambar is a tragedy we will not complete it here – you can find the full tale in The Children of Húrin by J.R.R. Tolkien. However, we can say that at the end of Túrin’s life Gurthang is revealed to have not just a spirit but a personality – and in the only instance of a weapon speaking in Tolkien’s works recalls with regret the unjust slaying of Beleg Strongbow.

The story of Turin is the last place in the Silmarillion we find Gurthang. However, though it was not included in the published text of the Silmarillion, we can tell you Tolkien intended a special fate for Gurthang. He wrote that at the Final Battle at the end of days Túrin would use Gurthang to destroy Morgoth forever – and bring final vengeance for the House of Hador and all the wrongs Morgoth has done to the world.

Though its blade is not black as was the sword of Turin, the Darksword Armory Gurthang is a powerful weapon that was inspired by the work of the Dark Elf Eöl. The mild steel guard is inscribed with flowing Elven script, and its graceful lines contrast the rigid and resilient steel in which it was inlaid. The blackened hardwood handle evokes the memory of the Dark Elf that forged it, elegant knotwork reminiscent of Elven architecture as depicted in Lord of the Rings art and film. Together the guard and handle create an unmistakable Elven design that one would find at home in a variety of fantasy settings.

Any sword capable of slaying the Father of Dragons must be robust, and our version of Gurthang is no exception. A broad, double-edged blade compliments the elegant hilt furniture, and two fullers grace its length nearly up to the tip. The sword has noticeable blade presence, capable of devastating cuts while retaining structural integrity – but the length of the guard and the pommel’s counterweight bring the point-of-balance back under 3 inches, giving the sword a deceptively lively feel in the hand. Should you find yourself facing down darkness in your life this sword is sure to be your faithful companion.