NOTE: In this short article, geographical and political factors were largely ignored for the sake of brevity. Some regions developed metallurgy sooner and some later, but that is a broad topic in its own right.

It is not uncommon to hear people claim that there is some sort of a super-material for swords. A material which makes them better, stronger, sharper. The idea pops up every so often in various media, be it games, movies, TV series or books. Anyone who knows the basics of what a sword should be realizes that this is nonsense. After all, if such a material existed, modern-day smiths would be sure to use it. There’s only one little catch: it is real, and they are using it. 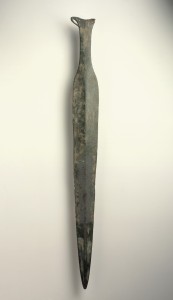 Weapons were made from different materials at different eras; often, this can be seen in the name of the age in question: Stone Age, Bronze Age, Iron Age… And through these millenia, people were always ready and willing to accept new, better materials for their weapons. Switching to a new material was a very slow process, however – the first swords according to archeological data go as far back as 1700 BC for bronze swords, and some even argue for 3300 BC for the copper sword-daggers. Swords which can be said to come close to the quality of edged weaponry we make today were only produced in the 16th century. In the course of almost five millenias, humanity has found the ultimate material – THE material, which makes swords better, stronger and sharper: steel.

So why did it take so long? The short answer is that the science of metallurgy was very slow to progress. The long answer takes us on an adventure through the past. The very first swords, if they can be called that — some argue they are still daggers — date back to 3300 BC Turkey and were made of arsenic copper, one of the most bountiful metals around.

The iconic image of molten metal being poured into molds holds true for these copper (and consequently bronze) swords. However, the tensile strength of copper falls quickly with length, meaning the sword-daggers had to be short so as not to break all the time. Still, making copper swords was not as easy a task as it might seem. Copper still had to be smelted, which requires temperatures of just under 1100 C, and proper casting is not as simple as it might appear at first glance. After the sword was cast, there was still the issue of work-hardening (i.e. hammering) the edges, raising the hardness and making for a sharper, more durable cutting edge. Since copper, especially when compared to today’s steel, is soft and can break easily, a leaf-shape with a pronounced spine was used, to make breakage and bending less likely.

At some point it was discovered that adding tin to copper yielded an alloy with superior mechanical properties: bronze. By 2000BC, there is good evidence that mankind was actively looking, mining and purifying tin. While it remains a mystery how bronze was discovered, it is very obvious that the aforementioned mining of tin was deliberate and primarily for making bronze. Bronze does not lose its tensile strength with length as quickly as copper, so the first proper swords could appear. Bronze, being an alloy, has many variations, the defining factor of which is the percentage of tin used: as a rule, the more tin is present, the harder the bronze is, but it breaks more easily. If it has less tin, it is softer and more prone to bending. Different cultures prefered different percentages of tin: Europe usually had around 10%, while China used 20% tin bronze (though usually the 20% was around the edge and 10% at the core) . The production method stayed pretty much the same as with copper dagger-swords: casting of molten bronze supplemented by work-hardening. The shape, too, remained very similar, though somewhat elongated. 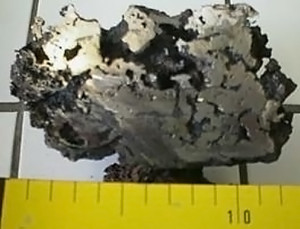 The problem with bronze is that it is not exactly plentiful. Scarcity makes it precious even today, so other metals became sought after: enter the Iron Age. It is a common misconception that bronze is inferior to iron for weapon-making — in fact, it is sligh tly better in its mechanical properties. But iron is common, tipping the scale towards iron weapons. There are also other issues with iron – for instance, the melting point of iron is at around 1500C, which is a good 400c above the melting point of copper – and with any metal used for weaponcrafting, it is important to make sure there are no impurities present which might weaken the structural integrity. With copper and bronze, this was achieved by smelting. Iron was heated to around 1200C, which liquified most of the slag (basically the impurities in iron), leaving behind a spongy lump known as a bloom, but did not remove all of it. So, additional hammering was required to purify the iron further and close the pores where the slag once was. Even when temperatures high enough to smelt iron were achieved (which wasn’t possible until the early 13th century in Europe), a new problem presented itself: molten iron reacts with carbon very quickly, leaving it with too much carbon to be used for weapons. Typically, there would be more than 2% of
carbon in it, and it came to be known as pig iron, completely inappropriate for swords.

When iron is heated in the presence of carbon (such as from a coal-fueld fire or by being heated with organic matter nearby), it reacts with it, forming steel. Steel is harder than iron, but it provides a whole plethora of new problems. First, since steel is basically iron with carbon, and the carbon changes the properties of steel, different carbon levels meant different properties. Unlike bronze, where the properties depended on relatively large quantaties of tin (2-20%), carbon changes steel much faster. Typically, modern sword steels range from 0,45-0,95% carbon. It’s no surprise that discovering steel, and how to make it homogenous, was a long process continuing all the way to the 20th century. And although steel by itself is already a much better sword material than iron, that is not its greatest advantage — heat treated steel can be several times as hard as its untreated conterpart, and much tougher to boot. This requires a complex process, starting with heating it up to critical temperature, then quickly cooling it in a quenching medium. After being quenched, it is still incredibly brittle, so the process is far from over. With modern steel, if a quenched blade falls on the ground, it is so brittle that it will shatter. Tempering (heating the metal at lower temperatures) is necessary, which takes away a little bit of the hardness but increases the toughness. The exact process is heavily dependent on the percentage of carbon and other elements in the steel, making it very difficult to achieve under medieval circumstances, where homogenuous steel was incredibly difficult to produce. Not only that, since carbon was provided by organic matter added by chance or due to superstition, it was difficult pinpointing why some iron became steel.

The smiths did notice that some bits of iron, namely the ones which have somehow achieved some sort of carburization, were better for swords. So various methods were devised to make the best use of it. Sometimes, the hardest parts of a bloom were used and welded together, though this was an expensive process. Some swords show signs of case-carburisation, where iron swords are slowly heated with some organic matter to make a steely outer shell. Other still have an iron core with steel wrapped around. It wasn’t untill the 15th century that all-steel swords became common, when fineries enabled decarburisation of pig-iron, lowering the carbon levels enough to make steel.

Heat treatment was another slowly developing science. While there are some swords that show signs of heat treatment as early as the 6th century, it was rather very rare untill the 10-11th centuries. By the the 15th century, a form of heat-treatment called slack quenching was common. This meant that a red-hot blade was cooled relatively slowly, which mitigated the britleness of a full quench, yet made the steel harder and tougher. However, this achieves a mixed structure of steel instead of a more homogenous one that a full quench followed by tempering offers.

15th century Germany saw the rise of attempts at full heat treatment, especially in the Augsburg workshop, where many such attempts were succesful. The production of steel advanced in strides, so the 15th century saw much more homogenous steel than in the past. And although not all heat treating attempts were succesful, even the attempt itself would often provide armor and weapons of superior quality. The quality was never uniform, though. There is evidence of slack quenching and tempering, full quenching and tempering, just slack quenching and even of untreated iron in the 15th and 16th century.

The next truly remarkable step in the history of steel happened in 1855, with the introduction of the Bessemer process, named after its creator Henry Bessemer. This allowed for an easier production of steel from the starting point of pig iron. The final touch only came in the 1950s, when the process of basic oxygen steelmaking (where oxygen is blown through molten pig iron to control carbon content)
was introduced, and is still used for the production of modern steels.

So the development of the super-material lasted for over 4000 years, and was completed less than 60 years ago. Had the medieval smiths, no matter the geographical location, had access to modern day
steels, they would most likely see it as a material created by magic. The swords we use today are the result of five millennia of technological progress, and that is absolutely amazing.

Williams, Alan. 2013. The Knight and the Blast Furnace: A History of the Metallurgy of Armour in the Middle Ages & the Early Modern Period. Brill Academy Pub.

2012. The Sword and the Crucible: A History of the Metallurgy of European Swords Up to the 16th Century. Brill.

Alen Lovrič found his passion for swords some ten years ago, seven of which have been dedicated to training HEMA. Of course, since swords never come alone, he also started doing research into various related topics, educating himself slowly in fields such as sports sciences, metallurgy and sword properties.