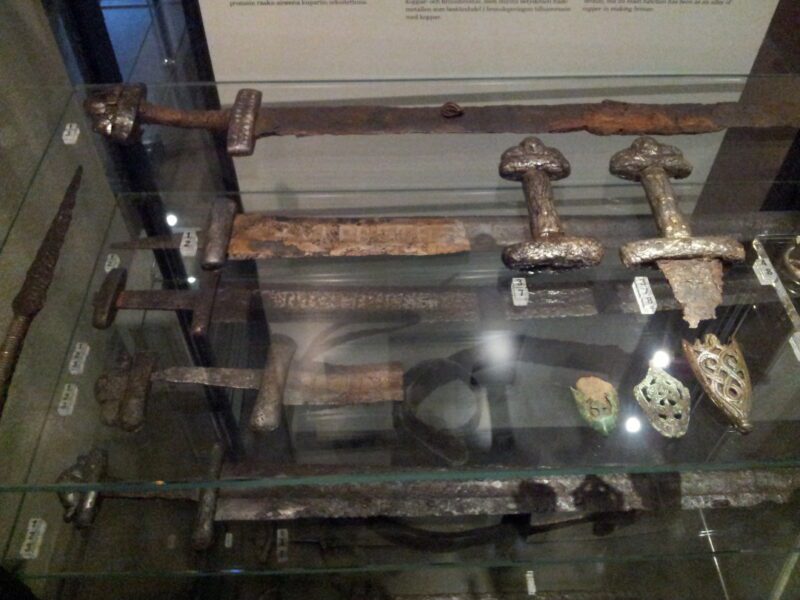 During the early Middle Ages, the primary metal available for the manufacture of swords was derived from bloomery iron, made by heating iron ore with charcoal in small furnaces. While sufficient for some applications, the finished iron was plagued with slag inclusions that weakened the metal, rendering a sword blade that was prone to break when struck with force against a hard object, such as a shield or another sword.

When considering the low carbon content of the steel, combined with the typical amount of slag inclusions in early medieval steel, the result was an excessively soft blade prone to breakage and damage at a time when his life depended on the quality of his sword.

One sword stood out among all others during the time, however: a Viking Sword that is known as the Ulfberht. While medieval steel was weak, containing particles of slag, the steel of the Ulfberht swords was different : Ulfberht – a superior steel that could not be replicated until well into the 1880s during the Industrial Revolution.

The Ulfberht swords were made of crucible steel, which was not at all common during the Middle Ages. Being cast in a crucible, this type of steel burned much hotter than contemporary steels, thus burning off most, if not all, of the slag so common to steels of the day.

In addition to this difference in smelting, swords made of this type of steel contained far more carbon – while most steels contained a carbon content of as high as 0.520, the steel of an Ulfberht sword contained as much as between 1.2 percent and 1.6 percent. In modern classifications, steel of this carbon content is categorized as spring steel. Thus, the Ulfberht sword was far stronger – and far more flexible – than standard medieval steel. It possessed the ability to bend when thrust at a hard object such as a shield, whereas other swords risked cracking, breaking, or shattering under such duress.

Ulfberht swords were extremely rare and undoubtedly far more expensive than other swords manufactured at the time. Of the thousands of Viking swords that have been recovered throughout Scandinavia and Europe, only 171 are marked as Ulfberhts. Of these, less than 50 have proven to be genuine Ulfberht swords.

One of the distinguishing characteristics of an Ulfberht sword was that name was inlaid in the blade using a contrasting steel. The first letter and the last letter of the name were preceded by a cross, rendering the appearance of the inscription as +Ulfberh+T. Others that have been recovered bear the inscription +Ulfberht+.

Metallurgical analysis has also revealed that the Ulfberht swords were only made between 800 and 1,000 CE, offering a clue as to where such high quality steel originated. Archaeological excavations have suggested that the Vikings did not manufacture their own steel.

However, other archaeological digs have established that the region of eastern Iran was, in fact, manufacturing crucible steel in furnaces far superior to any found in Europe before the 19th century. Many clues suggest that the Vikings obtained the steel via the Volga Trade Route, which they utilized from approximately 800 until the trail was closed to navigation in 1,000, which is the same year that manufacture of the Ulfberht swords stopped. 4 thoughts on “Rediscovering The Ulfberht”