An analysis of edge sharpness during the middle ages 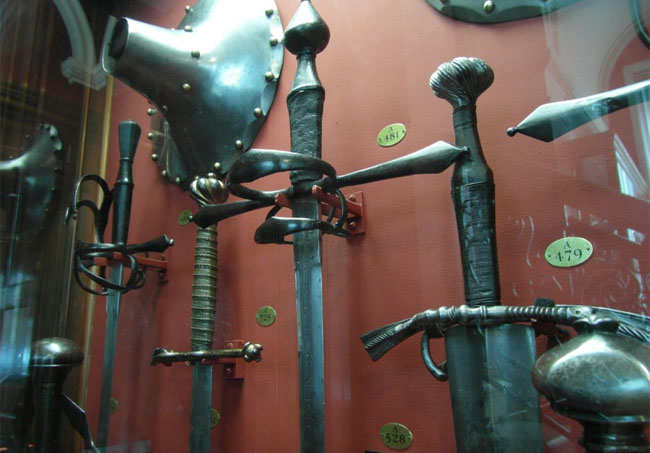 It is one of those devilish questions that can confound people even today: how sharp was a Medieval sword?

The problem lies with the question – there is an underlying assumption that when it comes to how they are used, Medieval swords can be generalized into a single category. This belief is erroneous. The reality was that from the very beginning, the form and function of Medieval swords was fluid and in constant development. The “longsword” of the 15th century judicial duel, which was a cut-and-thrust weapon designed for unarmoured combat, was very different from the “longsword” of the 14th century knight, which was a thrusting weapon built to puncture plate armour.

Indeed, it would be accurate to say that a full-out arms race existed between bladesmiths and armourers in the Middle Ages, with armour developing to counter the latest weaponry, and bladesmiths modifying their swords to match. This is one of the reasons that when talking about Medieval swords, it is best to use Oakeshott’s Typology  – with no fewer than 22 different categories of sword blade in use from 1000 to 1500, it is far more useful in understanding how swords developed and how they were used.

The Oakeshott typology is particularly useful as, particularly in the early Middle Ages, it is next to impossible to determine the original sharpness of the sword through surviving examples. Swords used in battle survive primarily as archaeological finds, with the edges so corroded that any indication of the original sharpness is long lost. Determining the sharpness of a Medieval sword must usually be done through deduction, using the literary evidence, armour of the time, and blade type to figure out how sharp the sword needed to be.

So, when it comes to the sharpness of Medieval swords, the real question is, “how sharp did a Medieval sword need to be at any given time?” To answer this question, we need to examine the physics of a sword blow and what this means in terms of penetrating armour. The sword is used in three types of attack: the thrust, the cutting blow (striking with the edge of the sword in a swing), and the slice (drawing the edge of the sword with pressure against the target).

On a very basic level, in a cut or thrust, the power of the blow is generated by the mass of the blade and the velocity with which it impacts the target. The sharper the blade, the greater the concentration of force upon impact, and the more powerful and damaging the blow.

However, it is important to remember Newton’s Third Law: for every action there is an equal and opposite reaction. While the blade strikes the target, the target strikes the blade with equal force. This becomes very important when it comes to dealing with armour – hard metal armour has enough resistence to deliver force back into the sword, and the sharper a blade is, the thinner its edge is, and the more (BRITAL) it becomes. If a sword blade is too sharp when it hits a hard target, the edge can take additional damage that could have been prevented.

The slice, on the other hand, operates primarily through shearing. Again there is force applied, but, as a slice does not involve a percussive impact, it has less force than found in a blow. Therefore, the sharpness of the blade is a determining factor in the effectiveness of the slice. So, the first factor to consider in when it comes to the sharpness of a Medieval sword is what kind of blow the sword will be used for. The slice requires a sharper sword than a cut, and a thrust does not require a very sharp sword at all.

The type of blow will therefore be determined by the type of armour the opponent is wearing. Striking through leather armour is very different than striking a coat of mail, which it itself very different than striking a coat of plate. Against leather or cloth armour, a very sharp sword is an asset – leather or cloth armour is a relatively soft target, and, while it can absorb a great deal of force, both the cut and thrust would penetrate it. As a result, for the early Middle Ages prior to the Norman Conquest, we tend to see a lot of swords with relatively little profile taper – types X and Xa in the Oakeshott typology – and a lenticular cross section, built primarily for cutting, but also capable of thrusting.

From the literature, cutting appears to be the primary use of these weapons. The Battle of Maldon  records that Byrhtnoth’s nephew Wulfmær was “slashed by the sword.” In the same poem Eadweard swings his sword so savagely that he kills his enemy on the spot. When Byrhtnoth draws his own sword, he slashes. While slashes and cuts seem to be the most often used blow, thrusts appear in The Battle of Maldon as well – towards the end of the battle, Offa tells Ælfwine that he must encourage the men to use their weapons, and that they must “lunge and parry with our swords.” Slices are not mentioned at all.

Both the literature and archaeology give an indication that these swords were very sharp. The Battle of Brunanburh recalls the West Saxons chasing down Norse fugitives after the battle with “sharpened swords.”

As metal armour such as mail became more common, particularly in the period of 1050-1350, sword blades changed. Represented by Oakeshott types XII to XIV, as well as XVI and XVIa, they became far more tapered, while the blade geometry remained optimized for cutting. At least one type of sword – the Type XVI and XVIa, appeared to be specifically designed to handle reinforced mail armour. A coat of mail is a far harder target than leather armour – because it is metal, slicing does very little to it. Swords built to deal with this armour were not well served by a near-razor edge. This was in part because mail armour is far better at delivering force back into the blade – as mentioned above, too sharp a blade would leave too little material to receive this force, rendering the edge too brittle to handle the impact without taking unnecessary damage. This does not mean that swords of this period were dull – they needed to be sharp enough to bite into armour. The blades of this period were sharpened to strike a balance between the need to inflict damage and preserve the integrity of the blade.

It is towards the end of this period that we find a document that gives us an explicit insight into the use, and therefore also the sharpness, of the sword in this period. Known as i.33, it is the earliest known Medieval combat manual (A copy of the manual can be downloaded in PDF format at the following link: http://www.aemma.org/onlineResources/restricted/i33/i33text.pdf
I.33 dates to around 1290-1320, and is currently kept in the Royal Armouries.

The manuscript illustrates a duel with single handed swords between a monk and a pupil. Here the majority of strikes remain cutting blows, but thrusts are far better represented. Cuts to the arms are taught – and are enough of a concern that the primary use of the buckler is to protect the hand and wrist – and slices also appear. This suggests that in at least the early 14th century, single handed swords were kept sharp enough for the slice, regardless of any risk of damage from striking armour. This also suggests that a balance may have been struck where a blade could be sharpened so that it would slice, and still be able to strike mail without undue harm to the edge.

The advent of plate armour caused dramatic changes in sword design. Cutting would do very little to a breastplate – the steel would be too hard to penetrate with cutting blow, and would likely only blunt the sword. Many blades developed around 1350 were made with thrusting as their primary purpose. These blades tended to be stiff and triangular, with a diamond or hexagonal cross-section built to support the tip upon impact with a heavy target. Type XV swords for example, although still balancing thrusting and cutting, are far more optimized for thrusting. The blades of type XVII are thick and hexagonal in section – the shape and blade profile indicating that cutting was barely a concern. While they might have some sharpness, it was far from a primary concern. These were weapons built for the thrust, and little else. In Records of the Medieval Sword, Oakeshott describes this type as being designed to dent and bore holes in full plate armour. Oakeshott also records this type in both Archaeology of Weapons and Records of the Medieval Sword as being the closest the Medieval sword gets to a sharpened crowbar.

As warfare changed in the late Middle Ages, so too did the sharpness of swords. The 15th century saw cut-and-thrust swords, triangular blades built to deliver both effective thrusts and cutting blows in equal measure (Oakeshott types XVIII-XXII). Part of this may have been due to the development of the sword into an infantry and duelling weapon, which took it away from dealing with primarily heavy targets and back to light targets. A survey of techniques in German longsword (http://talhoffer.blogspot.ca/2011/05/how-sharp-were-medieval-swords.html) indicates that slicing was a frequently used technique, requiring a very sharp edge.

But even this exploration of sword sharpness provides little more than basic guidelines. That many swords were not razor sharp does not mean that razor sharp swords did not exist – while a razor edge is brittle against armour and difficult to maintain, Medieval swords could always be sharpened after becoming blunt. Even once one has considered the purpose of the sword, one must also consider how well it was built and maintained. In short, while there were factors that influenced how sharp a Medieval sword might be, there are few, if any, hard and fast rules.

It is one of the aspects of the Medieval sword that just when it comes to sharpness we see such a variety in how swords were constructed.

The sword was a specialized precision weapon, its sharpness determined by the armour it needed to penetrate as well as the combat techniques it was designed to carry out, with both armourer and bladesmith racing to create the next development.

It is in this arms race that we see the true artistry of the Medieval sword. Swordmaking was a dynamic art – as the nature of combat changed, and the types of armour on the field developed, so did the shape and sharpness of the blade to match. The sword was not a sharpened crowbar, or a simple weapon that was little more than a long knife – it was, in its day, the height of technology and engineering, designed and forged by people who understood the challenges faced by those on the battlefield and in the duel, and how to engineer the best possible weapon to meet them.

For further information about edge to edge combat and the proper use of a sword, please read John Clements excellent article. http://www.thearma.org/essays/damagededge.htm