The Myth of Chivalry

The idea of chivalry – the knight in shining armor defending God, king, and country with sword and flawless character – is not a new one. In fact, it can trace its roots back to the High Middle Ages and Early Modern Europe, to a literary genre called Chivalric Romance. The genre consisted of near fantasy stories about hair-raising adventures, often of a knight errant depicted as having heroic qualities, who goes off on a gallant quest. These stories involved an emphasis on courtly manners and tales of love.

Originally written in Old French, Anglo Norman, and Occitan, Chivalric Romance was later translated and written in English and German. In later romances, particularly those of French origin, there is a definite tendency to emphasize themes based on courtly love, such as faithfulness in the face of adversity.

Historical record, however, paints a very different picture. It reveals knights as ruthless, enforcers of the wills of equally ruthless lords and kings. For example, Roger of Hovedon, in his Chronica, for the year 1165, recorded:

After these things, Henry, king of England, returned from Normandy to England, and marched with a great army into Wales … he did justice upon the sons of Rees, and upon the sons and daughters of his nobles, for he had the eyes of the male children put out, and cut off the noses and ears of the females.

In the 11th and 12th centuries, knights were the sons of wealthy landowners who were merciless in the ruling of their domains. From early childhood, knights were trained in art of warfare, destruction, and killing. Knights formed core of a militarized landed gentry who relied upon terrorism to enforce their wills.

The reperception of the knight as being chivalrous began at the time of the Crusades with a Cistercian abbot named Bernard of Clairvaux, who wrote on behalf of the fledgling Knights Templar, writing: “It seems that a new knighthood has recently appeared on the earth, and precisely in that part of it which the Orient from on high visited in the flesh.”

Later in his writing, he went on to say:

To be sure, precious in the eyes of the Lord is the death of his holy ones, whether they die in battle or in bed, but death in battle is more precious as it is the more glorious. How secure is life when the conscience is unsullied! How secure, I say, is life when death is anticipated without fear; or rather when it is desired with feeling and embraced with reverence! How holy and secure this knighthood and how entirely free of the double risk run by those men who fight not for Christ!

Of course, he was referring to the Military Order of the Knights Templar, who were a unique combination of monk and warrior who rather than drinking and carousing when they had nothing else to do, spent their time in prayer and military training. Of the knights who went on crusade, many of them were members of military orders, such as the Templars, the Hospitallers, and others. While legends grew up around them later, the vast majority of the men were not of particular importance. Most of the men who joined the military orders were of lower nobility, the ordinary knights, and wealthy peasant farmers. There were very few rich or influential members. 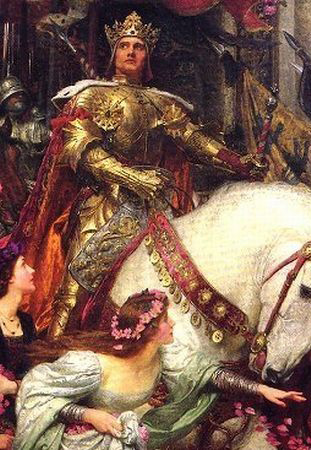 A good many knights were mercenaries who hired out their swords for money or loot. Mercenary knights were usually non-landed mounted soldiers who were difficult to control and thought nothing of pillaging, murder, or rape. These men had no moral code of chivalry and were often the most dangerous knights on the battlefield as a result.

When Simon De Montfort attacked the castle of Carcassonne in 1209 his shock troops were mercenaries. His logic in using mercenary knights was that they cost money, while dead the cost nothing and they were not as well trained. By sacrificing the mercenaries, De Montfort was sparing his better trained knights for harder battle once the castle had been breached.

Medieval warfare was brutal and incredibly violent, using weapons designed to maim and kill. It would take brutal, violent men to wield them, free of conscience. Knights understood the brutality of the time, for they were the ones who often inflicted it. A knight concerned with chivalry could not efficiently enforce the will of his lord when that lord wanted a monastery, convent, town or city sacked. Chivalry was often an invention of later fiction writers.

3 thoughts on “The Myth of Chivalry”