High quality modern made Damascus pattern knives are typically rare, custom
made at prices up to thousands of dollars. In taking on this new direction we were
making an effort to bring the beauty of Pattern-Welded knives to the market,
enabling collectors to purchase custom-quality Damascus knives at production
prices. Each model has been researched, designed, and tested by Halstein Forge’s
trained knifemakers. We are committed to producing blades that, like those made
by Halstein Forge’s parent company, are functional, durable, capable of retaining a
sharp edge, and aesthetically beautiful. We hope you have enjoyed this walk
through history with us, and hope that you will join us for our new venture!

Since our announcement in March 2017, Darksword Armory’s
revolutionary new line of production Damascus Steel Knives under the new
Halstein Forge subdivision has made significant waves in the industry. We have
had more traffic and more requests for information about this new venture than
almost any other in Darksword’s history, and the emails have kept on coming.
Here at Darksword, our motivation to create these beautiful and functional
products is not merely as a business – we are craftsmen, collectors, and historians,
first and foremost. And in order to help our fans (and the general public)
understand exactly what makes these knives so special, we thought we would give
some historical context for the use of Damascus or Pattern-Welded steel. In
addition, we also wanted to give you a special, “behind the scenes” peek at the
forging process for these knives – so please read on! 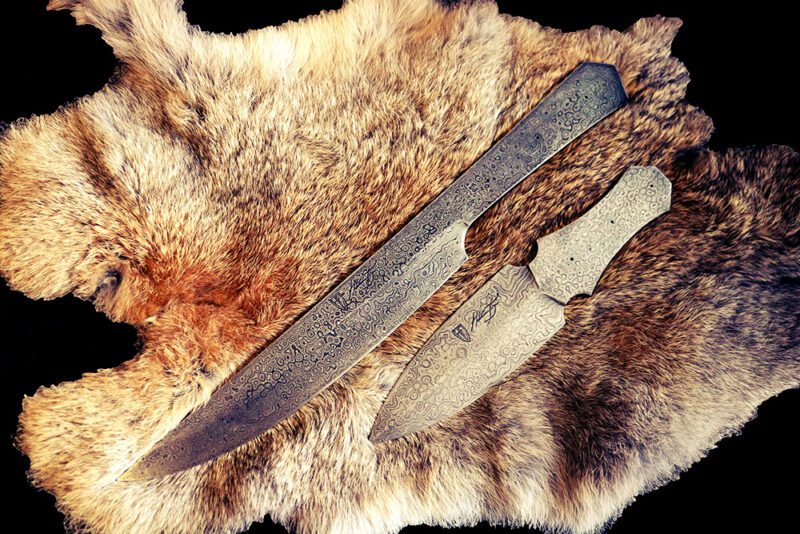 What the heck is Damascus Steel/Pattern Welding?

Since ancient times, blacksmiths have been constantly attempting to find ways to
create stronger, harder, more resilient metals. The discovery of high carbon steel
was a revolution that catapulted technology forward, and an ancient “arms race”
was on to find the best methods of working with this new metal.

In India sometime between the 6th century BCE and the beginning of the Common
Era, blacksmiths stumbled across a special technique to create a special kind of
steel that would come to be known as “Wootz.” This steel, also called Damascus
steel due to it being used later to make weapons in the area of modern-day Syria,
was remarkably strong and able to hold an incredibly sharp edge. This was due to
the presence of carbon nanotubes in the blade, which were created accidentally but
were still incredibly effective. Wootz steel became renowned, and was
recognizable by the swirling patterns on the surface of the blade.

The technique for creating Wootz was lost, though in modern times some claim it
has been rediscovered. However, due to advances in forging techniques and
qualities of metals available, modern blades can be just as resilient if not more so
than ancient Wootz. This is not to say that the work of those smiths in ancient India
should be disregarded – far from it. These ancient masters are giants on whose
shoulders we stand to reach the heights we have, and we are eternally grateful for
their collective works and wisdom.

Halstein Forge knives are not made from Wootz steel – instead, they are made
from something called “Pattern-Welded” steel, which is also referred to as
Damascus or “Modern Damascus.” Confused yet? The explanation is surprisingly
simple – Pattern-Welding is a forging technique that produces a similar visual
effect on the surface of a blade – the swirling patterns – but is arrived at by an
entirely different method.

Pattern-Welding is a technique which utilizes the heat of a forge to weld together
different pieces of metal – sometimes with widely varying compositions – into a
singular whole. It was used by sword smiths who desired to create blades with
unique properties, often attempting to weld a hard, edge-retaining strip of metal
onto a soft, shock-absorbing core. By twisting together the various types of metals
they were using these blacksmiths discovered they could produce patterns of
extraordinary beauty on the surface of the blade.
Pattern-Welding techniques were used in many places in the ancient world, most
notably by the Vikings who created some extraordinary examples of the technique.
Due to the similarity in appearance to Wootz steel the term “Damascus” because
used interchangeably for both types of steel in modern times. Right now Damascus
steel can be used in sword, knives, kitchenware, all manner of places, but when it
comes to high quality Damascus knives, this has typically been the province of
custom bladesmiths – until now. So that’s the history behind the steel, and we hope you enjoyed learning a bit more about it. Let’s take a look at what goes into the forging process for the new Halstein knives!

How are Halstein Forge Knives made?

Halstein Forge Knives are individually hand forged with a combination of 1075
and 8670m steel. 8670m is sometimes described as a “better” version of 5160 with
better toughness due to it/s nickel content (.88%) and edge holding capability due
to its carbon content (.71%), while 1075 is essentially similar to 15n20 with added
nickel. Using this combination, we make a 3 bar composite pattern welded
construction, stacked in 9 billets.
We begin by heating the billets and proceed in hammering the billet under the
power hammer in order to weld / bond the stock.

Borax is applied to remove the oxides and impurities to assure a clean forge weld
or bond. 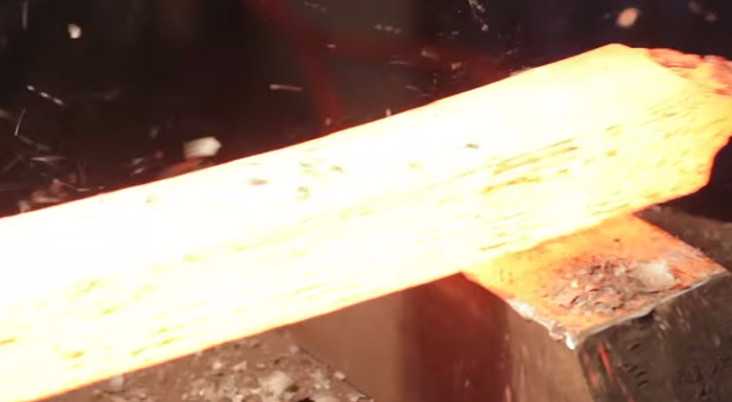 Once completed, the billet is heated again, twisted repeatedly and then power
hammered. Once achieved, you are ready to forge the basic shape of the blade.
This process is called “drawing” the blade.
The blades are forged with a combination of power hammer and a variety of
blacksmith hammers for final geometry or “fine tuning”, the blades are then evenly
heated (hardened) by quenching the blades in oil (1500 degrees F). Once hardened,
the blades are heated in three separate cycles at a lower temperature (475 degrees
F), in one hour cycles. This reduces the brittleness caused by the hardening
process.

Finally, the blade’s geometry is grinded to its final shape. The blade is then
dripped in acid. The acid etches out the harder layers of steel more than the softer
layers, revealing the beautiful pattern for which Damascus is known for.
The handles of Halstein Forge knives are all designed in house, and an original is
carved by hand out of solid oak. To reproduce these handles at a production level,
a special replicator called a pentagraph is used to scan and create each subsequent
handle without the risk of errors. Every handle is individually fitted tightly to a
solid, often visible tang for added strength and security.

Here are some images of how we Sharpen the Damascus Steel Knives using a belt sander. 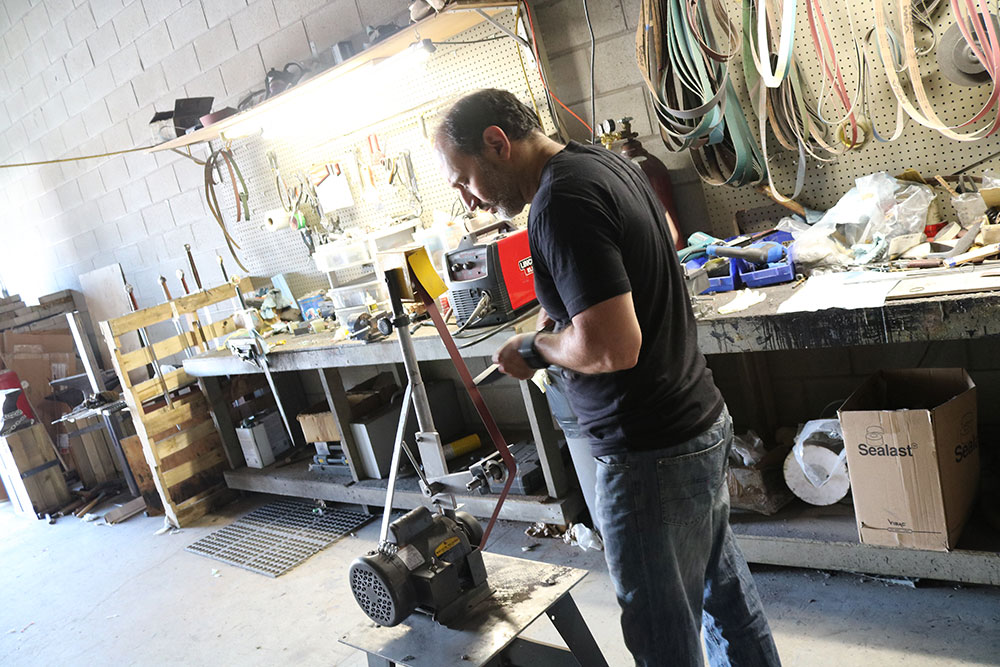 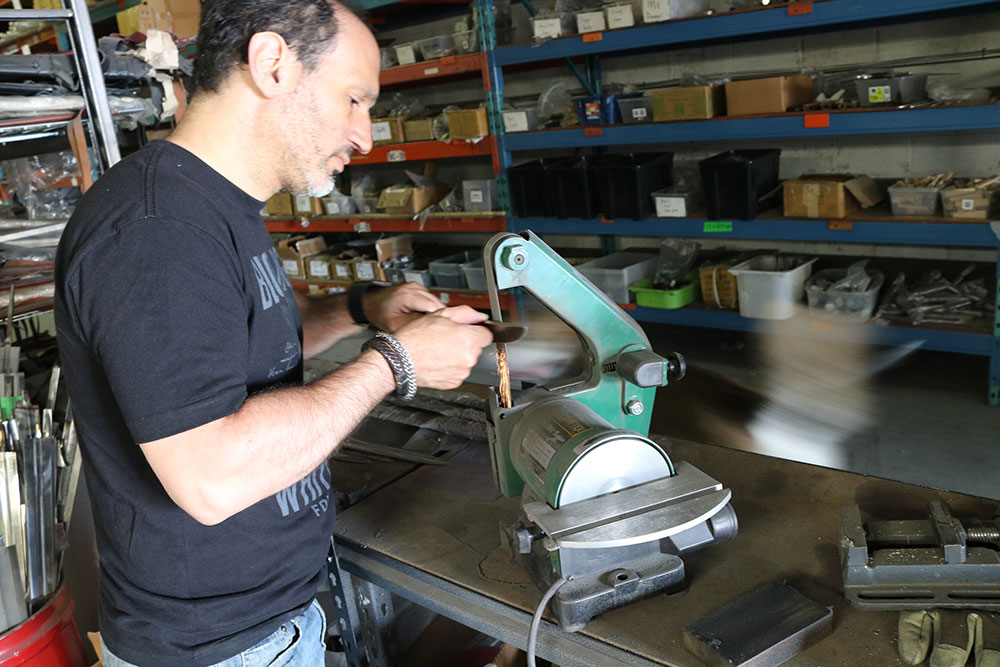 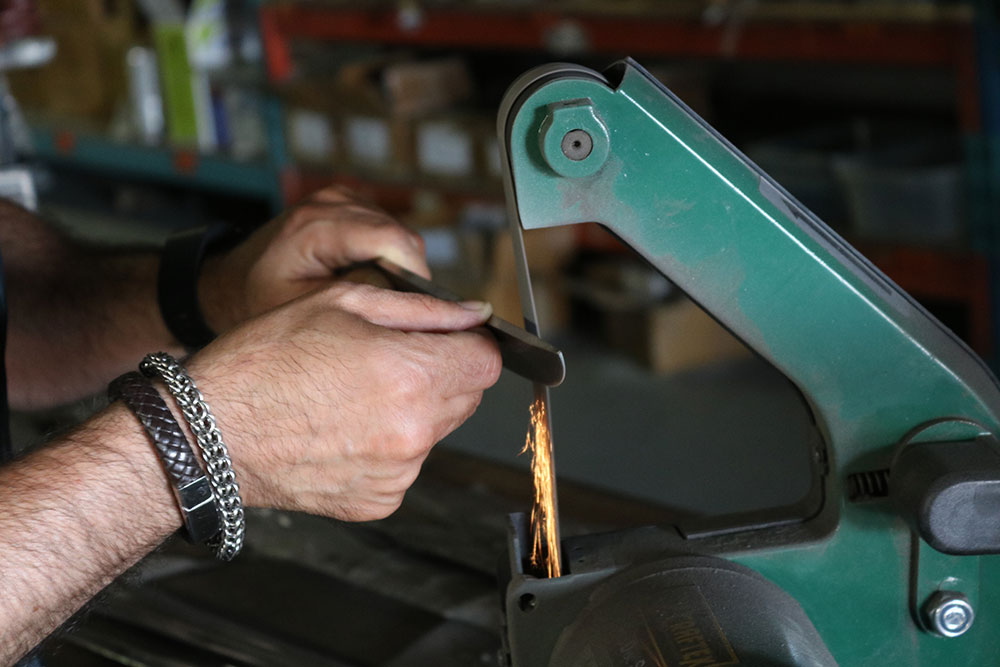