Swords are an important part of human history. From their place on the battlefield to their role in the romanticised depiction of knighthood and chivalry, even people who have no interest in collecting sword for themselves will know one if they see one. Works of art, history books, trips to the museum – you almost couldn’t avoid them if you tried. And because of how frequently they appear as we learn about history there are certain types of swords that have become more iconic, more recognisable, to the average person.

Thanks to depictions in popular culture, Vikings are the subject of much misinformation. Historians and Viking-enthusiasts alike can be reduced to (manly) tears when they see pictures of filthy, unkempt Vikings with horned helmets. However, despite the fact that Vikings used a wide variety of weapons  the iconic Viking sword is absolutely historical, and many surviving examples of it exist for historians to examine. The Viking Sword developed from early straight blades like the Roman Spatha, as did many European swords of that and later ages. It was a double edged, single handed blade with a wide fuller, a short handle, and simple guard, and often had a “lobed” style pommel. There is some disagreement about how the Viking sword was to be held; some grip the handle in a standard “hammer” style grip, while some experts insist it is more proper to use the “handshake” style grip. Despite the common depictions of Viking culture the Viking sword was carefully crafted into a graceful weapon, and was often adorned with intricate knotwork or designs. These days the average person is more likely to see a Viking sword on television than in a museum – but when quality shows like the History Channel’s “Vikings” do such a good job showcasing these weapons, only the most persnickety of enthusiasts would weep at that fact. 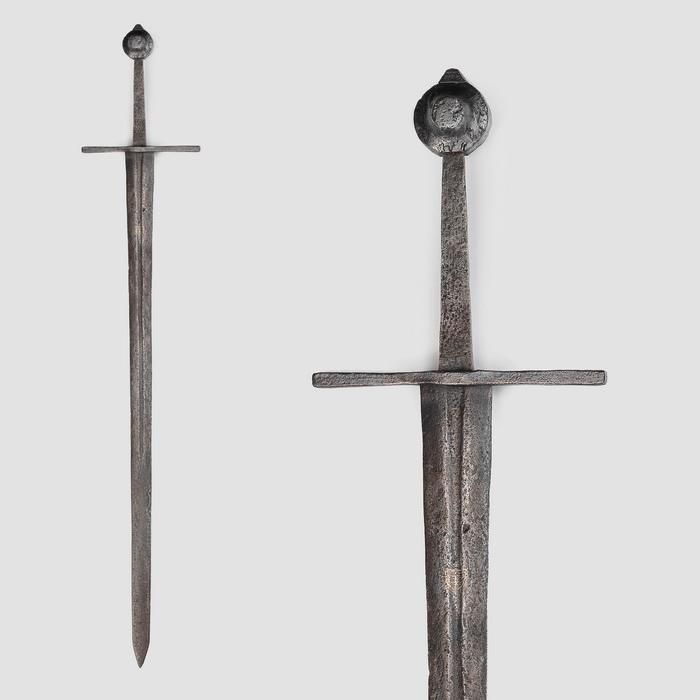 The Norman sword is perhaps more recognizable by name to collectors or students of medieval history, but as a design it is just as important as any other sword on this list. The Norman sword is a transition piece, a sword that existed in between the Viking sword previously described and the knightly Arming sword that was to come later. During this transition sword hilts became longer cross-guards, and the pommels became nut or wheel-shaped. The geometry of blades changed subtly as well, typically being longer, having narrower fullers, increased profile taper, and an elongated point. These changes started making European swords more suited towards cut and thrust swordplay as opposed to hacking and slashing, which was how swords were most commonly used up to this point. Simply put, the Norman sword design is where we first see the emerging style of medieval sword that is so instantly recognizable in movies and pop culture. 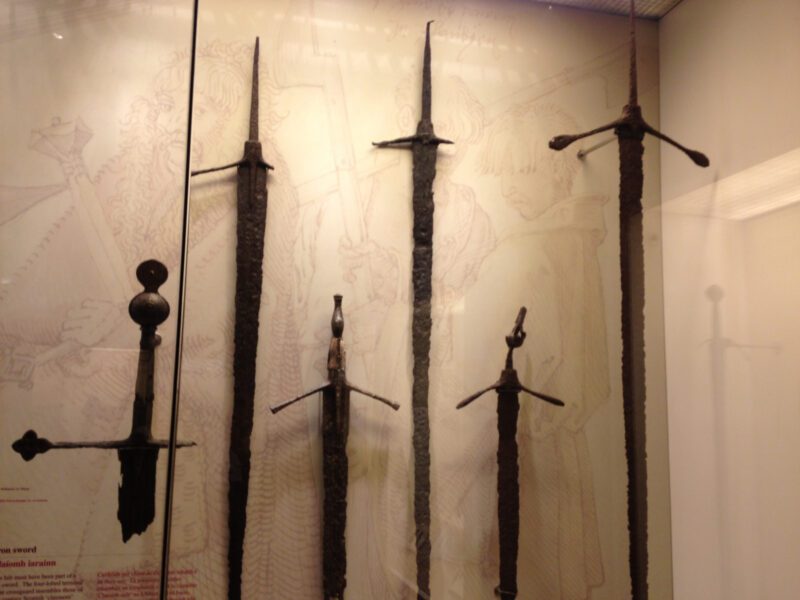 The Claymore is our first two handed sword on the list, as well as our first sword from Scotland. The name comes from Scots-Gaelic and means “great sword,” a very apt descriptor of this massive weapon. Unlike the iconic sword (but, sadly, historically inaccurate) from the movie Braveheart, Scottish Claymores had a distinct, almost uniform design. The long, broad blade sprouts organically from the forward-angling arms of the hilt, and a wheel pommel commonly completed the construction. Claymores are most often found with the distinctive “quatrefoil” design at either end of the slanted hilt. In use between the 15th and 17th centuries, the Claymore has been visible enough in art and museums that even for the non-collector, they are instantly recognizable.

Incidentally, “Claymore” is also the name of an antipersonnel mine used by the United States Armed Forces. The mine is recognizable for the words “Front Toward Enemy” inscribed on them, which if you think about it really would be quite fitting on the sword as well. 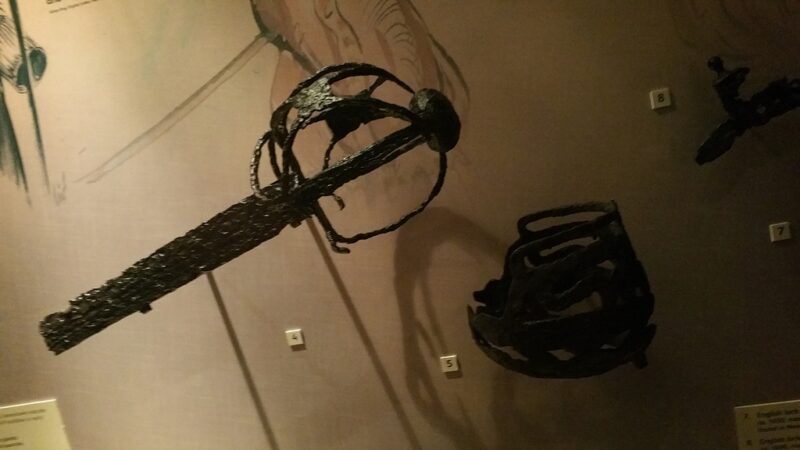 A straight broad blade and an ornate, often brass hilt that encompasses the user’s hand are the defining characteristics of the second Scottish sword on our list. The blade was typically either a double edged blade like many European swords or a “backsword” style, which were straight but single edged. The Scottish basket-hilted sword is unique among the European swords on this list in that some were still carried during the First World War – though they first appeared in the 16th and 17th centuries. This sword is recognizable not only for its distinctive design but also as a part of the dress uniform of the Scottish military. The writer of this article was able to see many surviving historical examples of this type of sword on display in Castle Edinburgh during a visit to Scotland – just like the kilt and the bagpipes, they are an iconic and recognizable part of Scottish history. 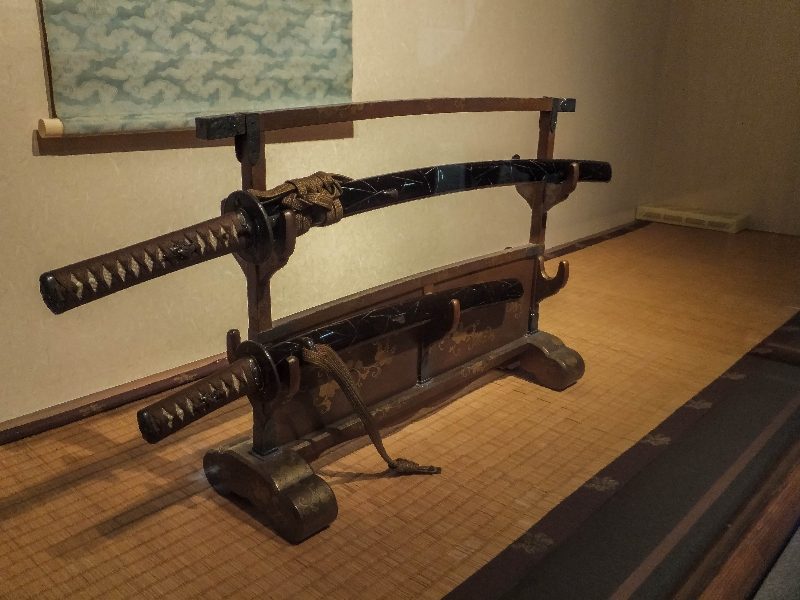 No surprises here, the Katana is one of the most recognizable swords on this list. Katanas come from the small island nation of Japan, a country with a rich cultural and martial history. These weapons of the mighty samurai are curved, single-edged blades that are known for their sharpness and cutting prowess. Due to the special forging process that is required to forge one of these swords, and due to the elevated level of importance placed on them in Japanese history, Katanas have an almost mythic quality attached to them in pop culture – no other sword on this list has the same level of mystique associated with it. These swords appear in many different media, not all of which are Japanese – the Highlander series being one notable example. Partly because of these media depictions the Katana remains one of the most recognizable swords in history. 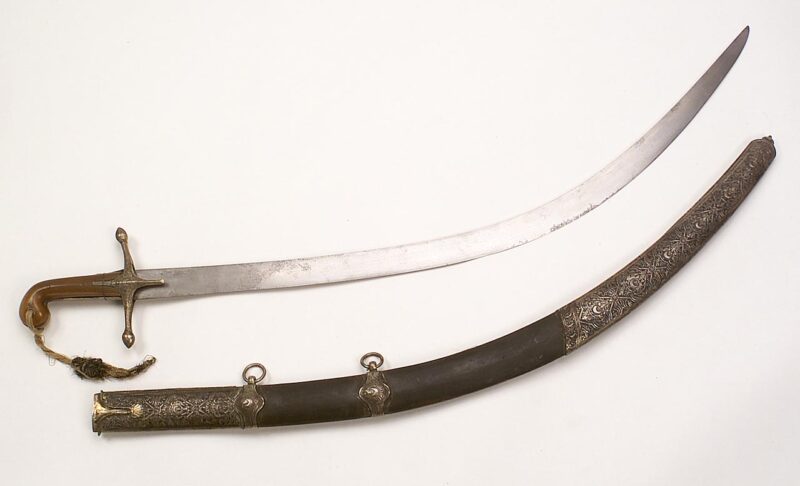 A single-edged, single-handed curving sword, the scimitar was wielded with devastating effectiveness on the battlefields of the Middle East. These swords first appeared around the 9th Century AD and developed from there into the iconic weapons of the ancient Arabic nations. The long, slender blades were so effective because the curve of the blade allowed it to have a longer cutting edge, carving deeply into flesh and bone. They were often made long in order to be wielded effectively from horseback. The scimitar evolved throughout history as it was carried throughout the Middle East and Asia for centuries afterwards, eventually spreading to India where it was observed in action by the British. It is generally accepted that the scimitar and its descendants also inspired the modern cavalry sabers, which were a staple on many battlefields including the American Civil War. 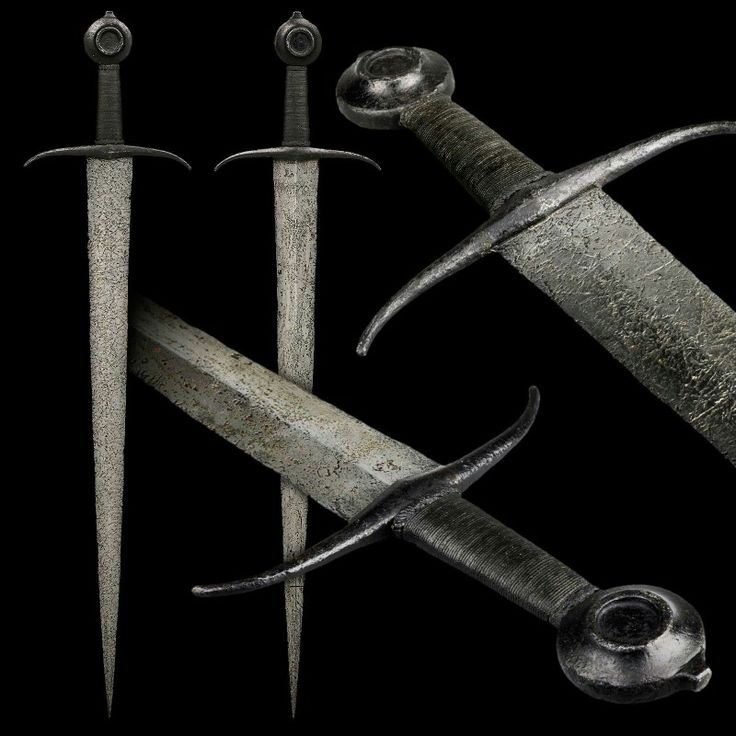 While knights in Medieval times (the period of history, not the restaurant – although probably them too come to think of it) were known to wield many weapons in combat, the classic image of a knight in shining armor, shield at the ready, and single-handed sword held aloft. This single-handed sword (sometimes called a knightly sword) is characterized by a blade a little less than a meter long and a cruciform hilt – similar to the earlier Norman sword, which is an ancestor of this weapon. As iconic as this sword is, it would unfortunately have limited effectiveness against heavily armored opponents – yet they remained an important part of a knight’s equipment. There is perhaps no sword on this list more recognizable than the arming sword as it is heavily represented in art, fiction, and museums. When you ask someone, anyone, to think of a sword – they will probably think of something that looks a lot like this. 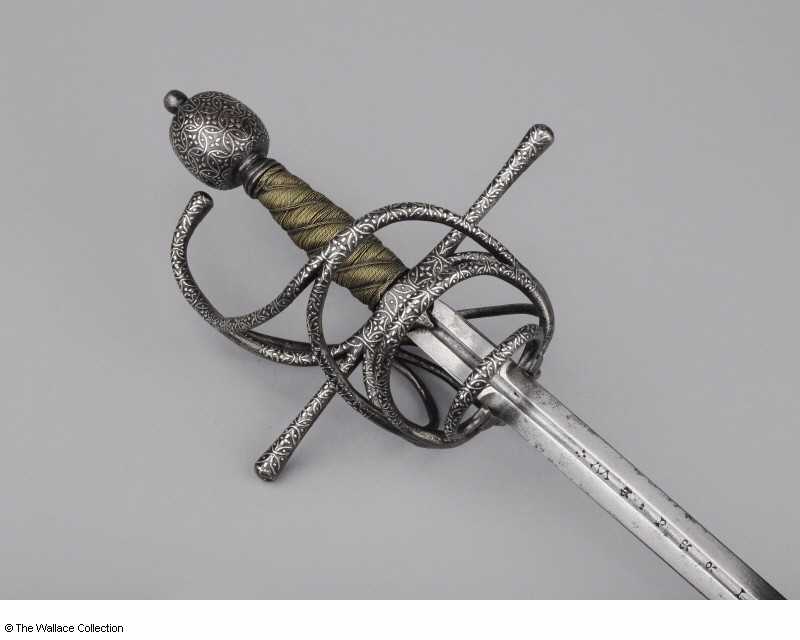 Made famous by the Three Musketeers, Zorro, The Princess Bride, and other swashbuckling adventures, the rapier is a more recent addition to this list.  Developed out of the arming sword as part of the evolution of the European sword, rapiers first appeared in the 16th and 17th centuries, and continued to develop into later versions like the European small-sword. Rapiers were characterized by a long, slender, flexible blade, and an ornate hilt that protected the wearer’s hand well. While these weapons were designed to be most effective at thrusting in combat, they could also be used in skilled hands to execute slashes and cuts. Often considered a “gentleman’s weapon,” the rapier is known in history and in modern pop culture as a dueling blade, and many different schools of swordsmanship developed across Europe – which eventually led to the creation of the sport of fencing. Rapiers are recognizable to many of us not only because of the beauty of their form and function but also because of the witty dialogue and quick-paced duels we have come to love in our favorite swashbuckling movies.

The Zweihander is a European design that came into prominence during the 15th and 16th centuries, and was likely one of the most massive two handed swords made to date.  This may have been a result of European smiths noticed the sudden appearance of rapiers and other smaller swords and deciding they wanted none of that nonsense. The term “Zweihander” means, literally, “two-hander,” and this is an appropriate descriptor as these are typically oversized, heavy weapons. The swords are long (up to nearly 6 feet) and they weighed significantly more than European swords typically did up to that date. The guards were very long and often ring-hilted, and occasionally the blades would have spikes that would be used to catch and drag enemies down off of horses as they rode by. Later Zweihanders were made even larger and more ornate and made simply as works of art or parade weapons. Still, these massive two-handed swords are distinctive and unforgettable for anyone who has seen one – especially if it was being swung at their head. 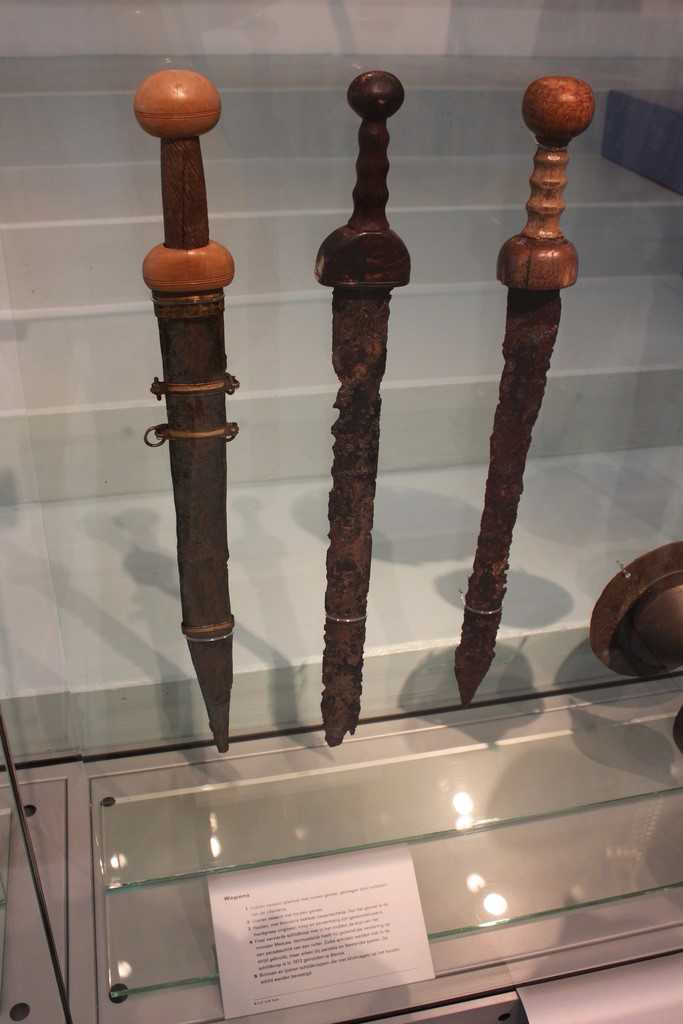 The Roman Empire has (rightly) a reputation as one of the greatest forces of military might in human history. Roman Legionnaires utilized groundbreaking military tactics to spread the empire across a massive area of Europe, and a big part of that was the iconic weapon of the Roman Legion – the Gladius. A short, double edged blade made primarily for stabbing in between the shields of a Roman defensive formation, the Gladius was used effectively throughout the whole of the Roman Empire. Many people in modern society will recognize these swords from media – television shows like Spartacus, or movies like Ben-Hur or Gladiator. As the Roman Empire spread throughout Europe so too did the Gladius and its later relative, the longer Spatha  – and as those iconic blades made their way across the continent they influenced sword-makers for centuries to come.