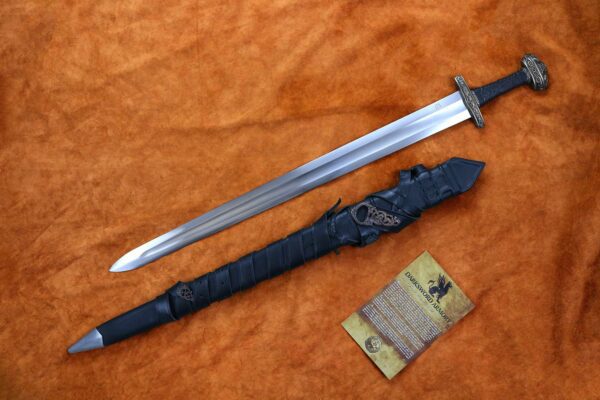 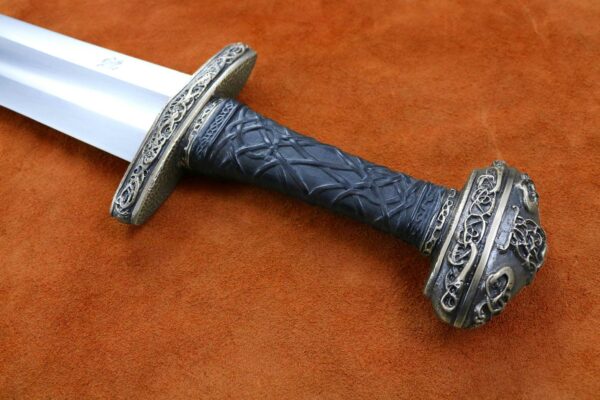 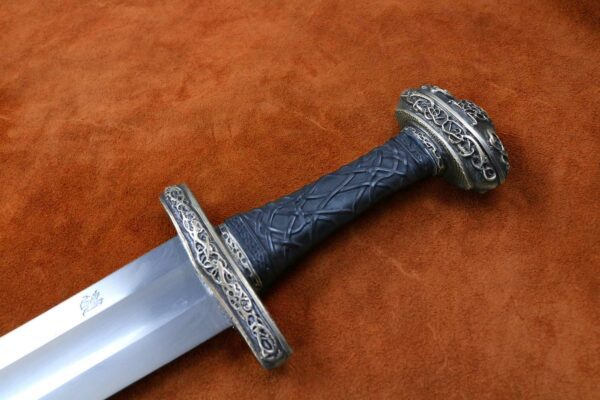 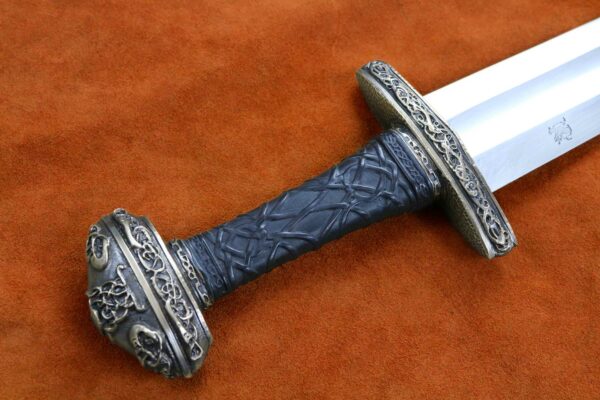 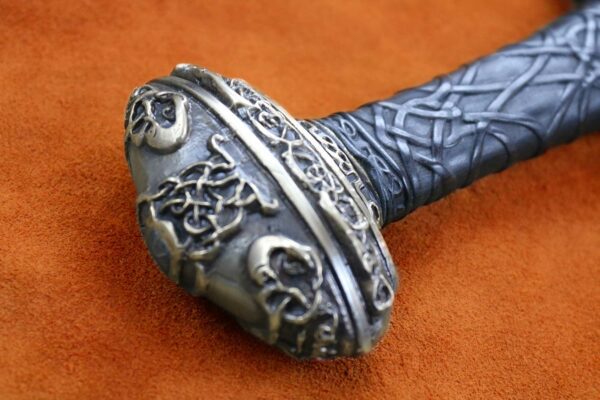 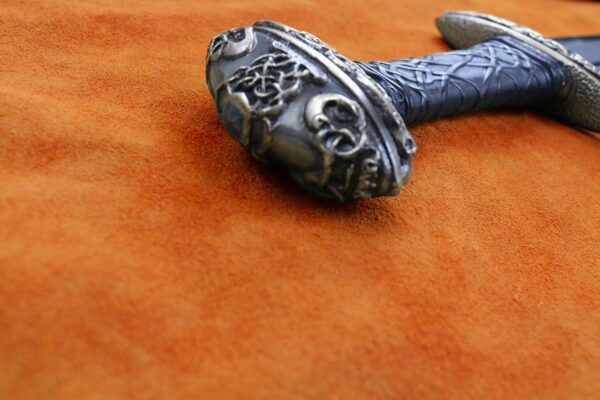 Aggregating all essential elements of Viking art and Norse Mythology, the Einar Viking Sword exemplifies the peak of Viking culture. Luxuriously handcrafted from the finest material, the Einar is an distinguished viking sword you will be proud to own. Hand-forged from 5160 high carbon steel and dual tempered, the Einar viking sword is a rugged viking weapon of choice. Well balanced and skilfully engineered, The Einar blends the artistic abilities of the Norse people and the central role of warfare in the viking world.

The Einar Viking Swords are Limited to 800 copies Worldwide
It was an age of adventure and savagery. A time when Vikings piled into long ships to set out across the seas, raiding and settling the lands they found. But far more than just savage barbarians, they were also farmers, poets, traders, and explorers. 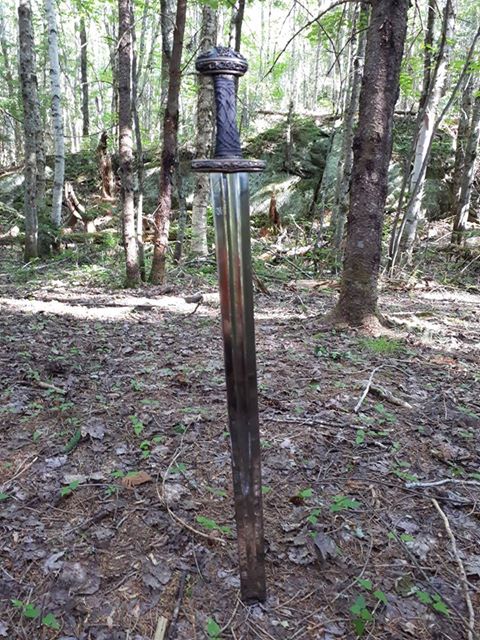 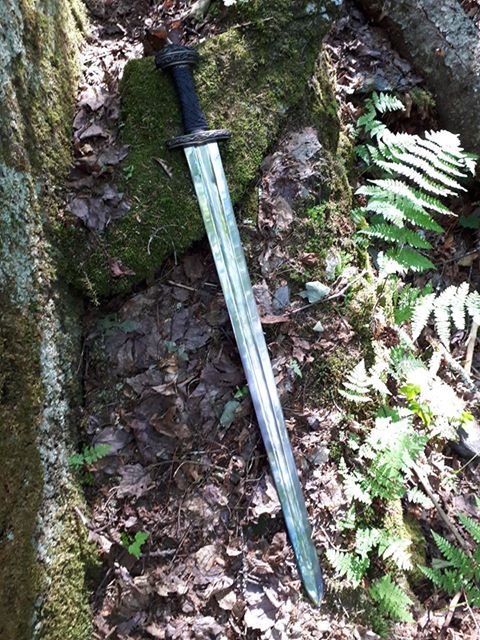 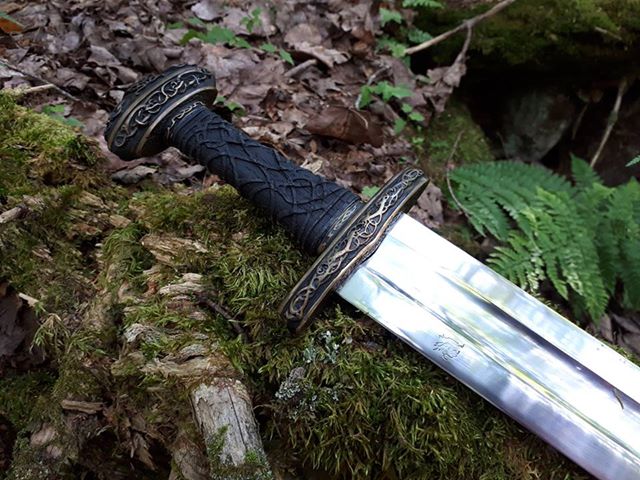 ‘I received my Einar today. And in have now joined all the faithful in Valhalla. This is by far the most amazing sword I now own. It is everything I expected and more. The pictures do it justice, but until one holds it in their hand, they cannot imagine the feeling of now having joined the elite warriors of old who sought out new worlds and new conquests. Holding this sword brings me as close to that as one can ever be. I applaud you Eyal and all at DSA, this sword even surpasses my Wolfsbane. And that I thought impossible. Also thanks for the extra goodies. Keep up the too work.’
– A. Meeds, USA.

For the Vikings, mighty travellers across vast portions of the ancient world, there was no destination more desired than Valhalla.
A proud and mighty race of warriors, the Norse survived and thrived in a dangerous world. The climate was harsh, the seas untameable, the world around them filled with hostile cultures. Yet they set out to make their homes in inhospitable lands, conquer the forbidding seas, and be such a scourge of fear upon the surrounding area that even now the image of the Viking raider is embedded in cultures around the world. Is it any surprise, then, that such a people would conceive of an afterlife as brutal and as noble as the lives they led?

Valhalla – translated as “The Hall of the Fallen” – was the hall of Odin Allfather, chief of the Norse gods. Within this hall he invited those Norse warriors who were bravest, fiercest, and strongest among all their kin to be his guests. This was not to be an afterlife of rest, though; for Odin gathers these warriors with a purpose. The great battle of Ragnarök approaches, wherein Jörmungandr the World-Serpent and Fenrir the great wolf rise up to do battle with the gods, laying waste to creation in the process. To aid the gods in this battle Odin brings the greatest of the Norse warriors to Valhalla – to train and wait in readiness for the final day when they will fight at the sides of their gods.

Entry into Valhalla was not a guarantee – only the best and bravest would be selected. For this reason, a Viking warrior would throw himself into the fray with berserker passion, attempting to fight with such skill and bravery that he would be worthy of Odin. When he died in battle, he could only hope that his deeds were great enough to attract the attention of the Allfather. Those who were worthy would be visited upon their deaths by the Choosers of the Fallen – the Valkyrie, female spirits of war and death. The Valkyrie were known as beautiful, and terrible, servants of Odin – the Sagas emphasize their ferocious natures, stating that to look upon them was akin to beholding a naked flame.

A Valkyrie’s duty would be to take the spirit of a fallen warrior to Valhalla, where they would join the ranks of the undead spirits (this is likely also why in the Sagas Odin is once referred to as Draugadróttinn – “Lord of the Undead”). Those worthy would become known as the Einherjer, a name that comes from two Norse words meaning “bold” and “valour,” but has also been translated as “one who fights alone.”

In Valhalla, the Einherjer engaged in what would seem like paradise to a living Viking – they fought, in ceaseless combat all day. During this time they would increase their skills and perform many deeds of valour unknown to mortal men. As the sun set on the hall of Odin the Einherjer would stop fighting and turn to revelry. Their wounds would be healed while they eat their fill and drink endless flowing mead, only to start the cycle again at dawn. To become one of the Einherjer was the penultimate goal for any Viking warrior, and they literally give their lives to attain it. For those that still believe, the Einherjer wait in readiness still.

The Darksword Armory Einar sword was created with these warriors in mind – in fact, the name of the sword comes from the same Nordic root word as “Einherjer.” We wanted to design a Viking sword that would capture the dualistic nature of this culture – the graceful deadliness, the savage beauty. We also wanted to create something that would be worthy of the spirit of the Einherjer – of those peerless warriors who dedicated their lives and deaths to the sword. The process of designing this sword was a long one, but we feel proud at the result – which is one of the greatest swords we have ever produced. We humbly present it to you, and hope that it will have a special place in whatever halls you carry it.