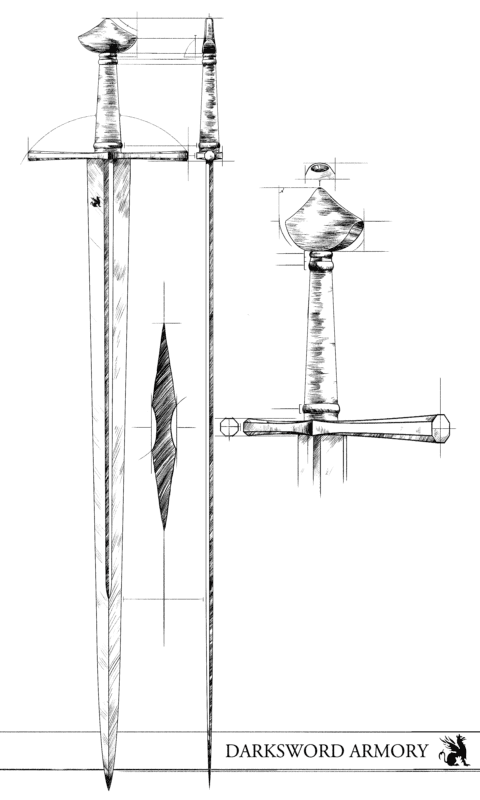 The 13th Century was a turning point in the making of swords and armors of the Middle Ages. Typically, armors dating prior to the 13th century were mainly composed of mail armor, or maille, made to counter the impact of the uniform sword blades of the early medieval period. By the mid-13th century however, the armies of Feudal Europe witnessed not only an increase in plated armour but consequently, witnessed a change in blade geometry. Finely tapered blades, with very pointy tips now served to pierce through ever-increasing plate armor of the military elite.

This is an interesting example of the transitional medieval swords used during the outset of the 13th century. Crowned with a “cocked-hat” pommel, originally found in Scandinavia, this sword hilt was generally mounted on a type X or type XII blade.

The type X was in common usage from the time of the Vikings throughout much of the medieval age, and is recognizable for its broad blade with full-length fuller. By contrast, the type XII had a shortened fuller and a more tapered cross-section, resulting in both improved handling and increased utility in piercing the armor of the High Middle Ages. Thus, the XII was a cut-and-thrust sword that evolved from previous incarnations of the medieval sword.

The “cocked-hat” pommel, classified by Petersen as Type Y, was used through the 11th and 12th centuries. By the 13th century the “coked-hat” pommel remained in use, but became more massive. Numerous examples are found throughout Europe. During his examinations of various swords of the middle ages, Oakeshott noted identical swords in various sources; from a crucifixion scene in a 13th century manuscript from Goslar, a sword found in Hungary with an identical pommel, another identical sword from Brunau, An example found in a German manuscript and a final example at the end of the 13th century on the grave-slab of Ulrich von Regensburg in Zurich.

The Darksword Armory Earl Sword is a true representation of a classic 13th century medieval sword. A straight guard married to a cocked-hat pommel identifies it as a later example of a medieval sword – sketches of these hilts are visible in Eugène Emmanuel Viollet-le-Duc’s Medival Encyclopedia. The short fuller and tapered blade is indicative of the Oakeshott type XII, and gives the sword its lively presence in the hand. A leather wrapped handle hides a robust tang, also a hallmark of the cut-and-thrust swords of the 13th century and later periods. For a timeless medieval knightly sword with excellent handling, classic fittings, and a distinctive pommel, the Darksword Armory Earl sword will serve you well.