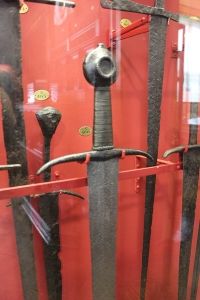 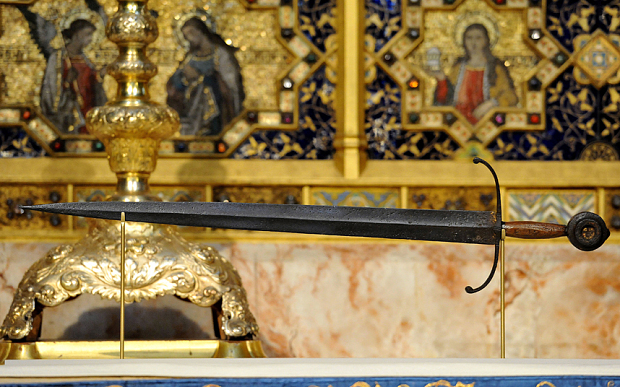 Okeshott described the sword as being graceful, with an acute tip. “the 2” wide blade dawns a four-sided flattened diamond cross section, typically associated with type XVIII Medieval Swords. The extremely tapered blade points to its transitional role from a purely hacking and slashing weapon to one that had both cutting and thrusting capabilities. In the late 14th C., improvements in plate armor began to appear and a new type of sword was required to successfully counter these improvements. As a whole, the design of Henry V’s sword, mostly due to its blade geometry, makes it as one of the most interesting swords to handle. Perfectly balanced, responsive, powerful yet light, the Henry V sword is considered as one of the best conceived swords of the late medieval period.  In later writings, Oakeshott described it as “..no mere funerary object, but as a magnificent fighting sword which comes to life in one’s hand.” Blade: 5160 High Carbon Steel. Dual Tempered HRc 60 48-50 at the core Total length: 39″ Blade length: 32″ Blade width at base: 2″ Weight: 2 lbs.