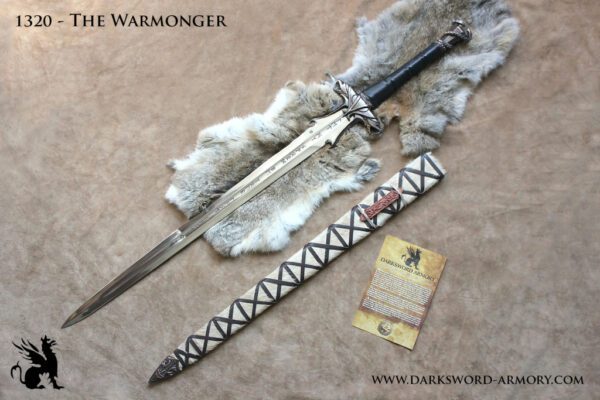 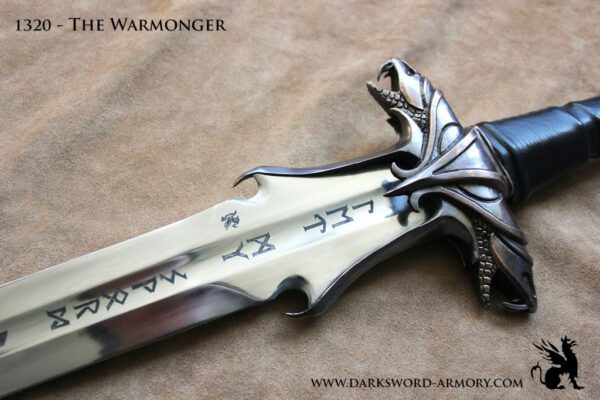 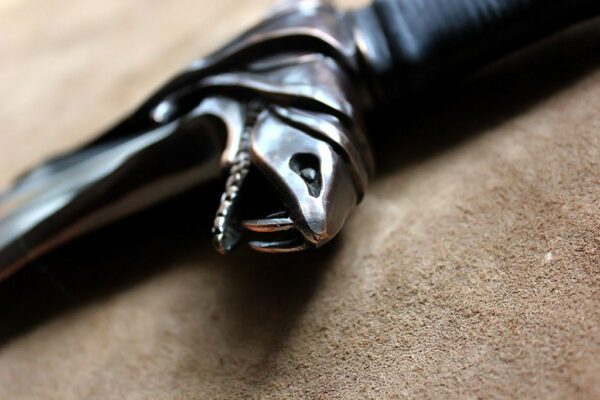 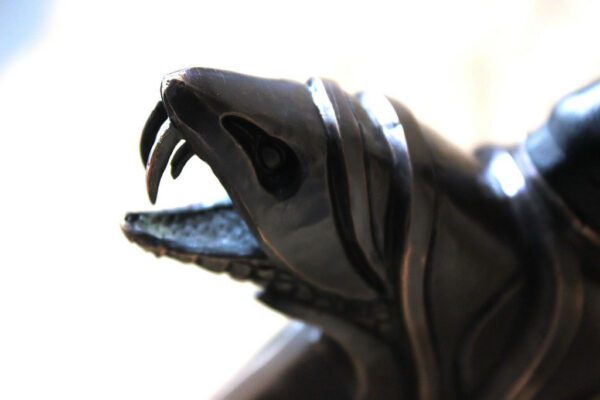 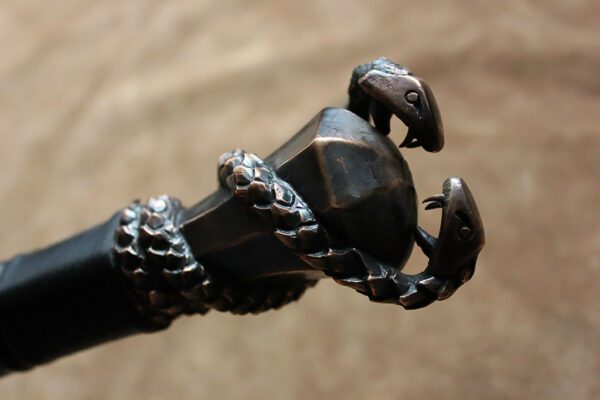 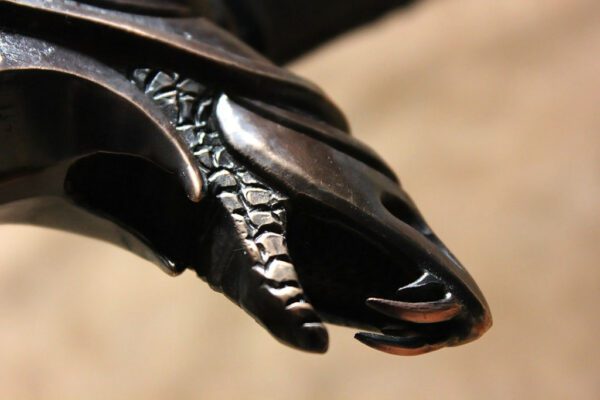 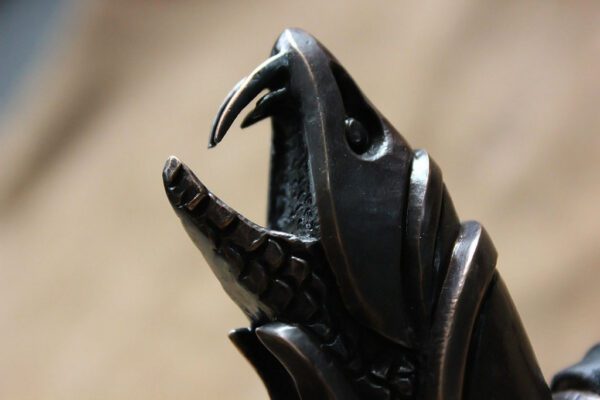 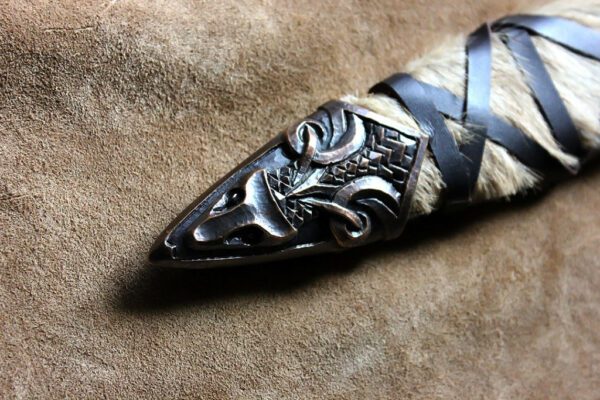 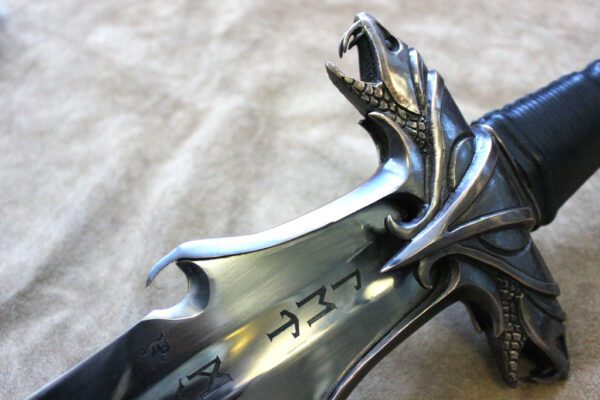 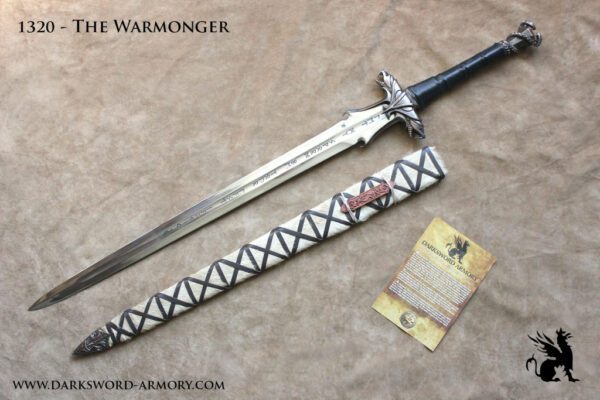 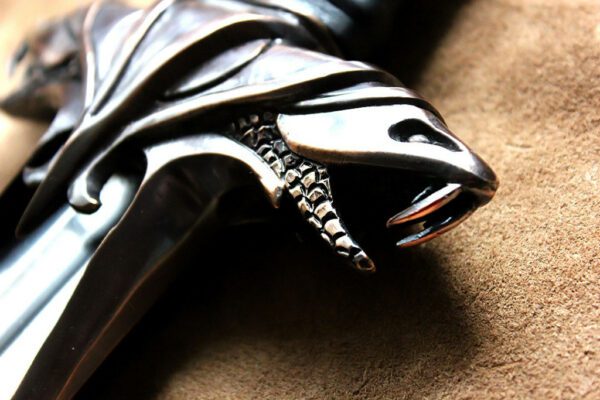 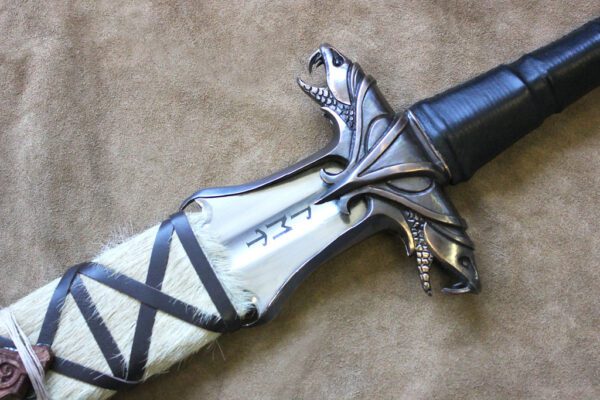 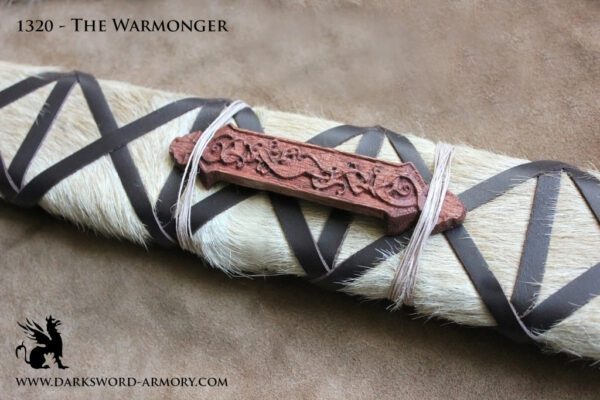 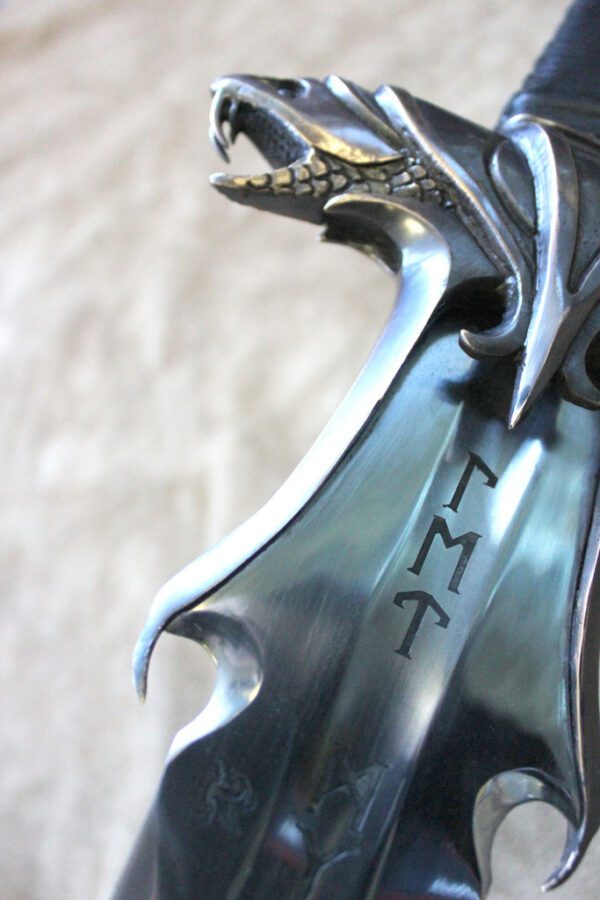 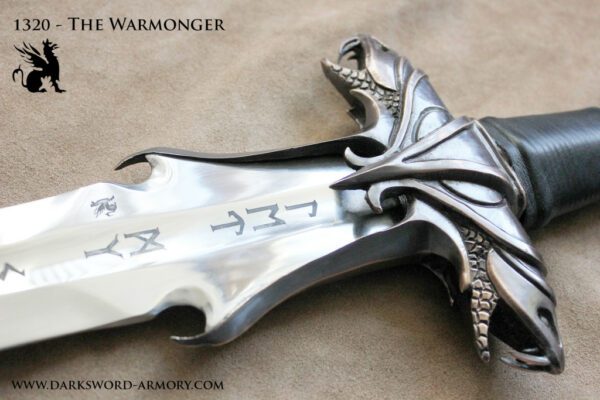 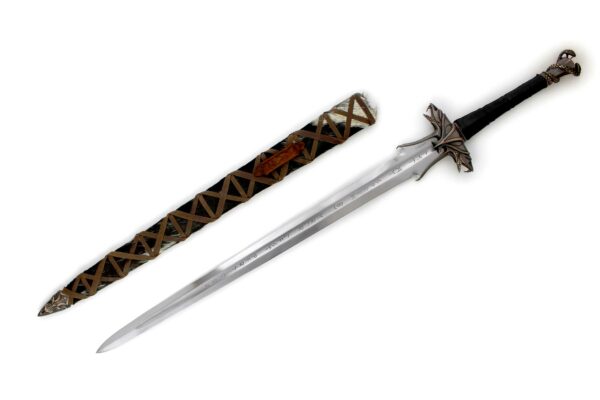 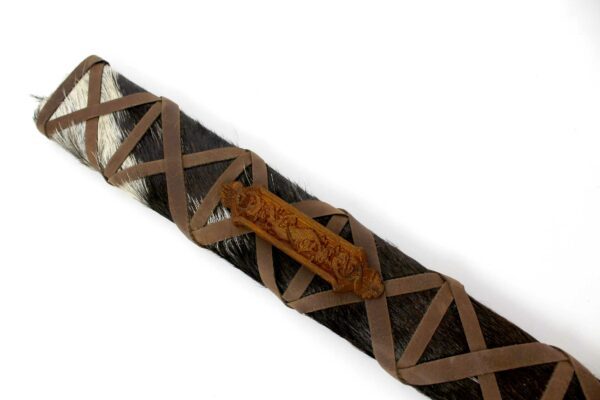 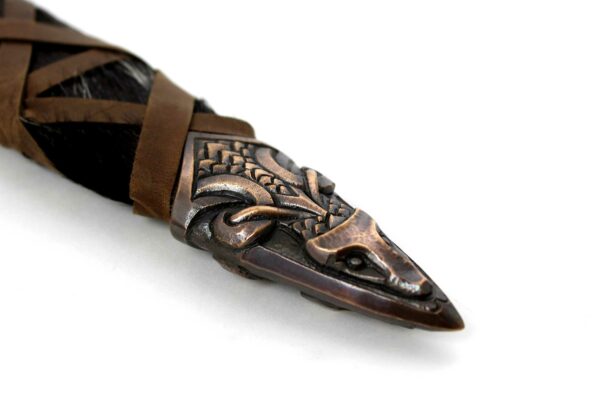 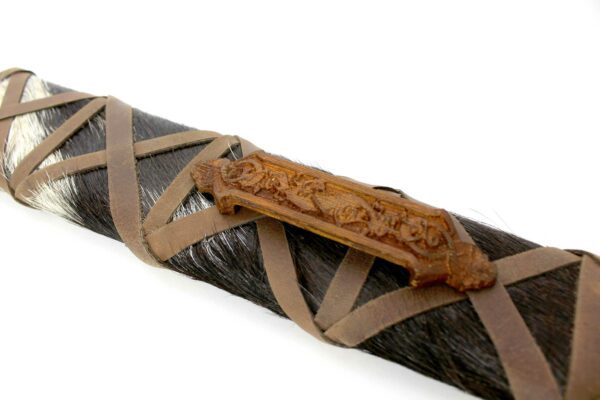 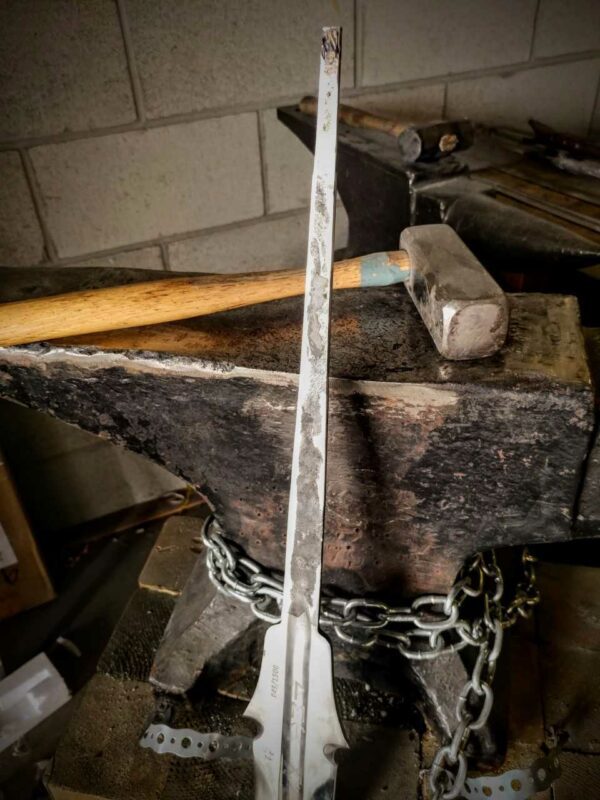 Limited to 1,500 Worldwide, each is individually numbered by Certificate and Hand forged from 5160 High Carbon Steel. 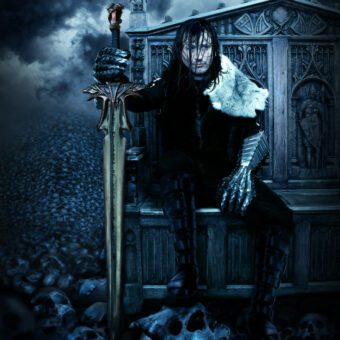 The design for the barbarian sword began as an inspirational piece while Eyal, the owner of Darksword, was in Paris. While walking he stumbled on a beautiful door knocker with intertwining snakes. The result was a brainstorming session with our designer to finally create the Warmonger.

Imposing, intimidating and brutish, the Warmonger is the quintessential fantasy sword, capable of delivering devastating blows. The mythic blade, with its crisp deep fuller, is inspired the Viking swords recounted in the legendary sages of the northern peoples, known as fornaldarsaga.  The Warmonger sword is individually hand forged and battle ready. The impressive resilient crisp blade is specifically engineered to penetrate plate armor with searing strength.

Brutish yet refined, the Warmonger sword is in a class by itself. Relatively light, responsive and classically styled, the Warmonger Barbarian sword delivers what it was designed to do! Backed by our commitment and reputation for forging some of the most durable swords in the industry, the Warmonger is faithfully crafted and stands as a legacy to the fantasy lore of the Warrior Norse mythology.

The blade has a thick ricasso that transitions into a single fuller double edged design that has norse runes inscribed, reading, “Let my blade be your last warning”

The Warmonger is limited to 1,500 copies worldwide! 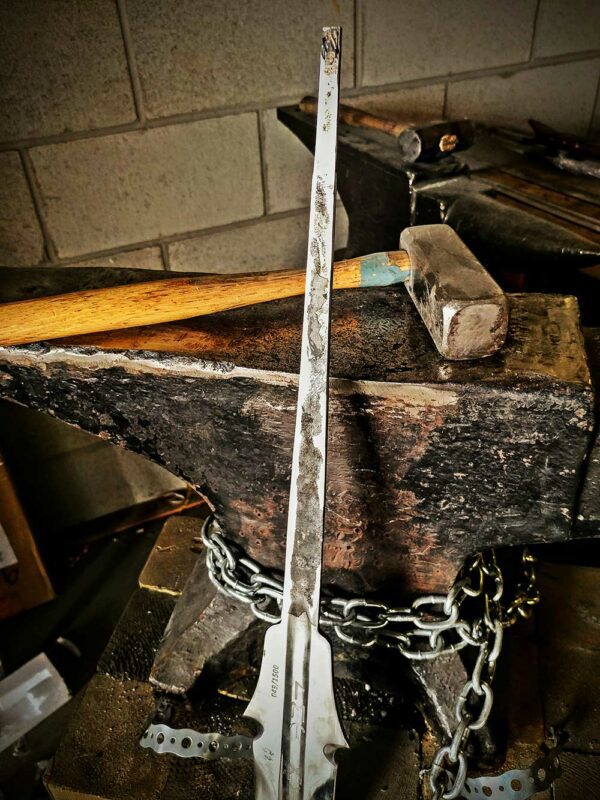 Note: We no longer include the bridge on the scabbard

2 reviews for The Warmonger Barbarian Sword (#1320)

"O [Roman] people be ashamed;
be ashamed of your lives.
Almost no cities are free of evil dens,
are altogether free of impurities,
except the cities in which the barbarians have begun to live..."
- Salvian, 5th century writer 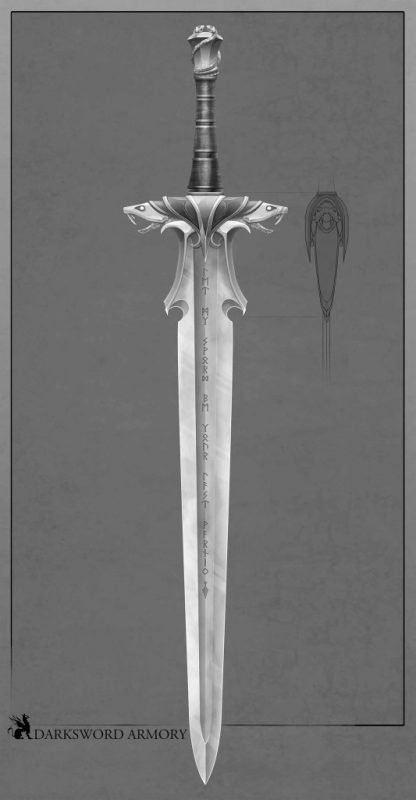 In 2014 Darksword Armory founder Eyal Azerad was on his annual Europe trip, a trip that includes multiple stops in museums in different cities to research historical examples of European swords. The journey took him to Paris, France, the site of the Musée de l'Armée, the Musée Carnavalet, and incredible Musée du Louvre. While walking through the city he happened upon an old building with massive oaken doors, twenty feet high and ten feet wide. These doors were graced with an extremely ornate door knocker resembling two intertwined snakes. Eyal was so taken by the design that when he returned to Canada he incorporated the theme of intertwined snakes into the hilt and pommel furniture of Darksword’s Barbarian-themed “Warmonger.”

While many cultures across Europe and Asia have similar concepts, the modern term “Barbarian” originates in ancient Greece. In its use by these people the term refers to someone from another, typically inferior culture. The Greeks used the word to describe the Turks, and later the Roman Empire would use it in reference to the Celts, Gauls, and Germanic tribes. While the word was pejorative, for the Greeks and Romans there was often an element of guarded respect in its use – respect for a brave and honourable foe, even in defeat. The expression continued to be used throughout Europe and into the Colonial age, although at that point the use became more condescending than respectful (consider the “noble savage” ideal and the acts of colonialism).

In modern culture, Barbarian carries a significantly different meaning – a meaning that is derived almost entirely from fantasy literature and media. Beginning in the early 20th century, fantasy authors such as Fritz Leiber, Clark Ashton Smith, Michael Moorcock, Edgar Rice Burroughs, and the incomparable Robert E. Howard, all began contributing to and defining a subgenre of fantasy called “Sword and Sorcery” fiction. Howard’s work in particular was formative, as his characters have been adapted into comics, television shows, and film series. In this genre the Barbarian became something new – a powerful, bare-chested, muscled warrior, typically from a tribal culture. Clad in leather and metal and wielding a massive two-handed sword, this fictional version of the Celtic/Germanic concept used unearthly skill to carve through armies of hapless foes. Unsurprisingly, this new take on an old concept proved to be wildly popular.

Barbarians got yet another pop culture boost with the advent of tabletop gaming. In 1974 Gary Gygax and David Arneson created Dungeons & Dragons, the first of many editions and versions of role-playing games. The Advanced edition of Dungeons & Dragons introduced the Barbarian as a unique class characterized by a brutal fighting style and a lack of intelligence. The Barbarian overpowered his opponents with sheer strength, serving as the “tank” of the party – going up front to soak up attacks and deal devastating blows. They also had a unique “Rage” ability that allowed them to fight with Berserker fury for a short time. Barbarians remain in Dungeons & Dragons and other role-playing games (including video games) as extremely popular choices, even staples of the role-playing genre.

The Darksword Armory Warmonger is an homage to the iconic Barbarian character. Conceived by Eyal Azerad and rendered by Darksword Designer Terry Maranda, it embodies all the characteristics of that mythic warrior. This massive weapon is an original design, but would look at home in the hands of any famous fictional Barbarian warrior. Even the scabbard is unique – wrapped in fur and leather, certainly something a tribal warrior would be seen carrying. The twin snake design is inspired by the door knocker in Paris, given a special Darksword twist.

Even in this civilized age, the Warmonger is a sword fit for the mighty Barbarian in whatever quest they undertake.

500.00 USD – 610.00 USD
Select options
We use cookies on our website to give you the most relevant experience by remembering your preferences and repeat visits. By clicking “Accept”, you consent to the use of ALL the cookies.
Cookie settingsACCEPT
Manage consent