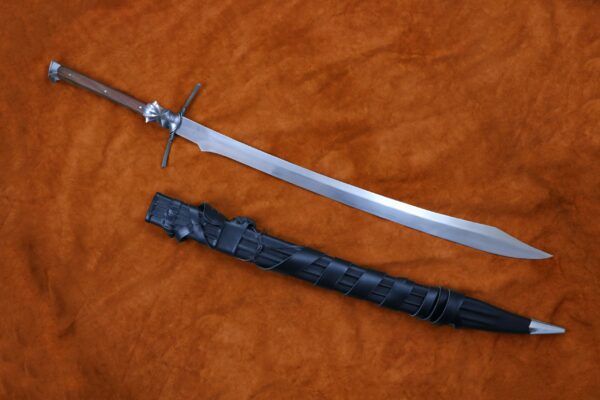 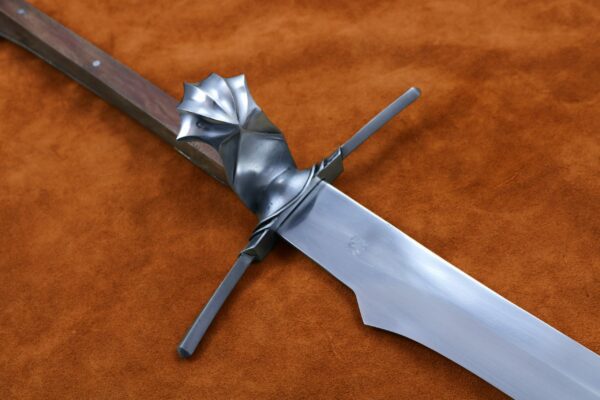 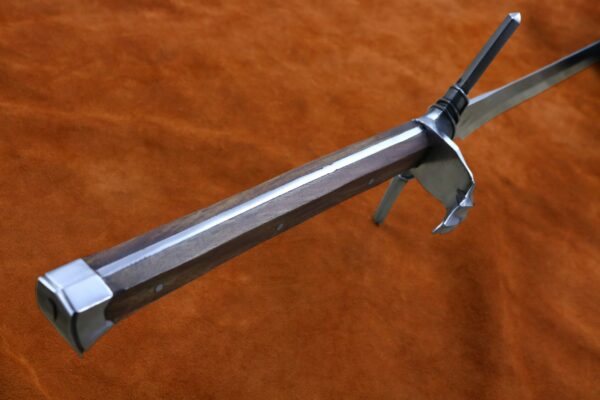 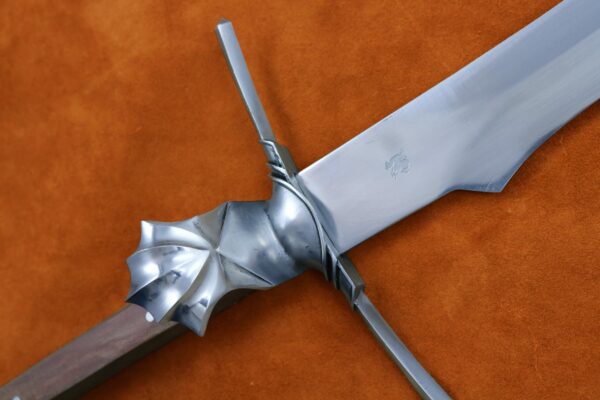 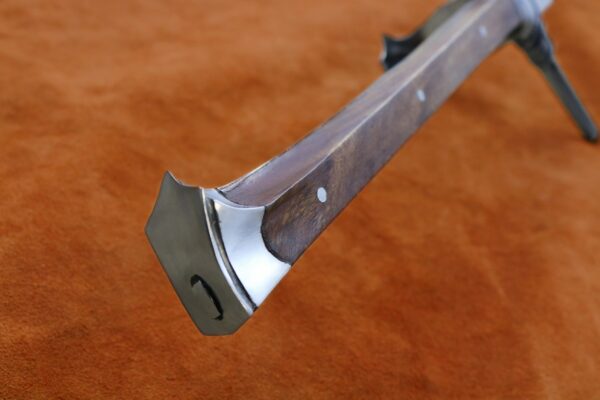 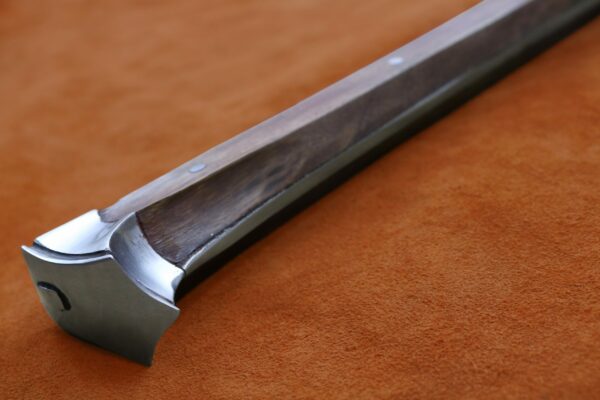 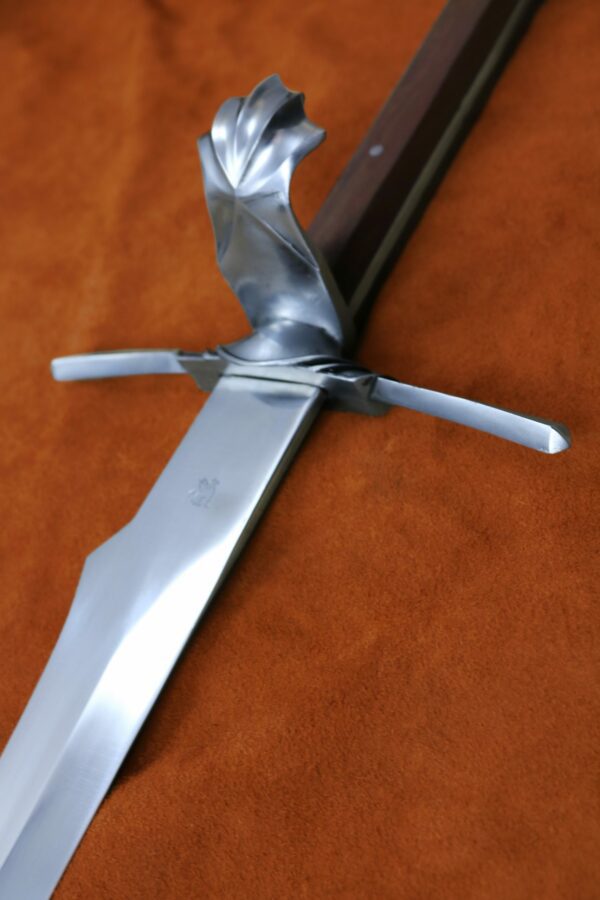 Weapons of war often evolved from tools used for hunting, farming, or day-to-day survival in a hostile world, and nowhere is that more clear than in the German “Messer” (meaning “knife”) style of swords. Messer swords began as simple, single-edged weapons, merely scaled up versions of the knives from which they descended. Over time, they became distinctive, deadly, and beautiful weapons associated with the Germanic peoples. Darksword Armory’s Knochenbrecher (German for “Bone Breaker”) is based on the Kriegsmesser, meaning “war knife,” the large and imposing weapon of the 15th-century. Large, brutal, and totally battle-ready, the Darksword Armory Knochenbrecher is a powerful cutter – balanced for delivering sweeping, heavy strikes as its historical counterpart would have been.

More information on the Knochenbrecher Sword and the history of the world in which it originated can be found below. 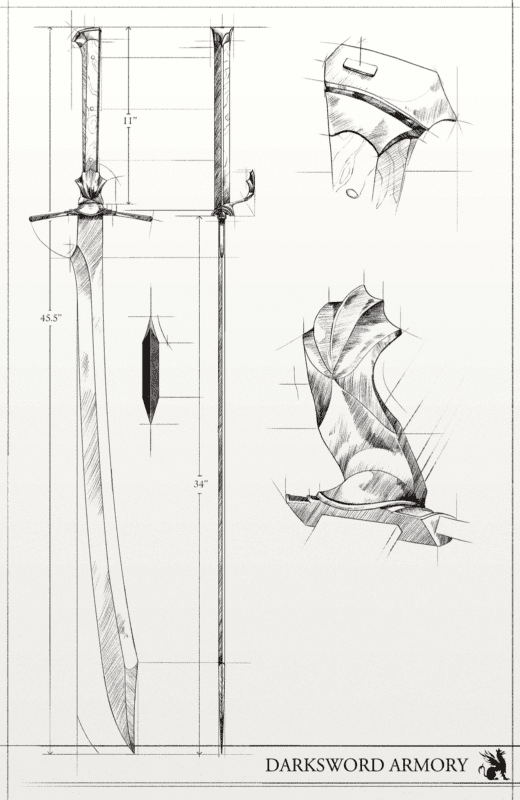 For most people, it is easy to visualize the swords associated with certain cultures. Mention the swords of Scotland and people tend to mentally picture the Claymore, bring Viking swords up in conversation and everyone knows what you mean. So too with the swords of China and Japan, and even England has Excalibur. Bring up swords from Germany’s history, though, and most people would draw a blank. Which is unfortunate, as Germany’s history of arms and armor contains some truly unique and distinctive examples.

The development of the sword in Europe was far from a linear process. Certainly, the Roman Gladius led to the Roman Spatha, which led to the Viking double-edged sword, which led to the knightly swords depicted in Oakeshott’s typology. This is generally accepted as the evolutionary chain of the European sword. However, this ignores a parallel development in Europe at the time, most notably occurring in the 13th century and onward, of single-edged weapons.

Possibly descending from the Viking seax or through eastern influences such as Turkey/the Mongols (or both), several different varieties of single-edged swords began cropping up in different locations throughout Europe. The falchion is one such example, depicted in medieval art as well as (rare) surviving examples from this period. Design of the falchion could vary; some were clearly chopping weapons, yet others were lighter and more agile than the double-edged swords of the day. What is clear is that they were typically reserved for soldiers of less noble birth, and have earned a reputation as “peasant swords” – though some decorated versions and depictions in art indicate this was not always the case. A separate typology (the Elmslie Typology) exists to classify these weapons.

In Germany, single edged weapons were also the province of the plebeians. The Bauernwehr (“farmer’s knife”), a mid-length, single-edged blade, was a common sidearm of the lower classes, used for both everyday tasks as well as combat. Later, more middle-class citizens would use the Lange Messer (“long knife,” aka Grosse Messer or “great knife”) as a weapon for personal defense. This greatly resembled the Bauernwehr but was too long for practical daily tasks; it was exclusively a melee weapon. This design was further adapted into the 15th century as the Kriegsmesser, or “war knife,” and it is here that this German design truly comes into its own.

The Kriegsmesser is a formidable weapon, and rose to prominence during use by the Landsknechte. The Landsknechte were a mercenary force founded in the late 15th century by Archduke Maximilian I von Habsburg, a military commander and son of the Holy Roman Emperor Fredrick III. Maximilian founded the Landsknechte, had them trained in Swiss military tactics (generally seen as a superior form of fighting in that era), and forged them into a force to be reckoned with for decades afterward. The Landsknechte would be hired to win many victories for later Emperor Maximilian, and until their decline in the mid-to-late 16th century were one of the most feared opponents on any battlefield in Europe.

The Darksword Armory Knochenbrecher is based on the type of Kriegsmesser that would have been used by the Landsknechte. The long, single-edged blade is crafted from 5160 steel, and flares towards the tip in order to bring the balance out and create power in each cut. While the wide

blade is relatively simple design, our approach to the sword gives it a touch of class with the shell guard and slightly curved quillions. The grip, clearly showing a visible tang, is long and suited for two handed use. All of these factors make this Kriegsmesser a very powerful medieval weapon, capable of destroying any target it encounters.

The Knochenbrecher is a massive sword, specifically made to inspire fear in the hearts of enemies. If you are worthy of joining the brave Landsknechte, please consider bringing this with you.

515.00 USD – 670.00 USD
Select options
We use cookies on our website to give you the most relevant experience by remembering your preferences and repeat visits. By clicking “Accept”, you consent to the use of ALL the cookies.
Cookie settingsACCEPT
Manage consent