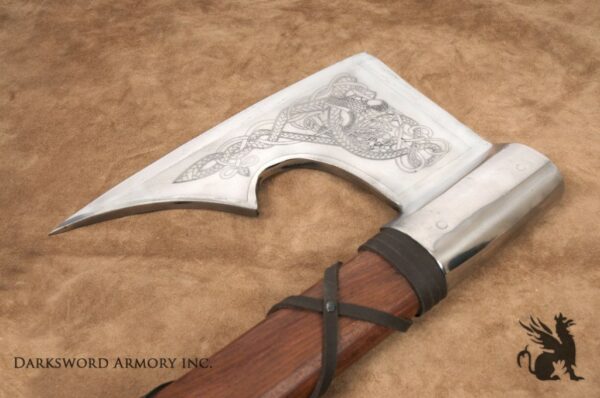 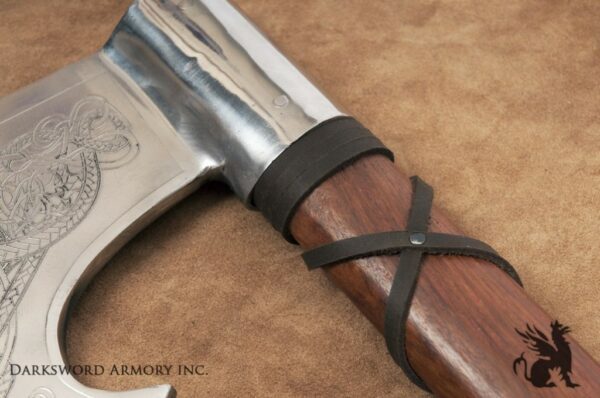 This Viking axe sits at the balance point between form and function. While reputed as a fierce weapon, the Viking axe was, at times, decorated with intricate, artistic designs and carefully created knot work. Similarly to the Viking sword and jewellery, the surviving relics of the Viking age point to an important level of appreciation to art that runs counter to the popular perception of Vikings as barbarians. The Norse Viking axe is inspired by Norse sagas and historical counter parts. Mainly fantasy in nature, the head depicts a great serpent in mammen style knot work. The Norse Viking axe head is 8” wide and 11” long. The total length is 34″

The Vikings have a reputation for brutality, and not an entirely undeserved one. The sight of a Northman longship coming round the bend was a terrifying sight for many Europeans. The Viking raids, leaving countless lifeless bodies and villages in ruin were recorded throughout the European continent. Despite this reputation, the relics that remain of their culture give insight into a remarkably different culture. The axes of the Vikings are at times decorated with intricate, artistic designs and carefully created knotwork. Even the weapons that survive show a level of attention to detail that runs counter to the popular perception of Vikings as barbarians.

This Viking axe sits at the balance point between form and function. It has the typical, well-weighted blade of a Viking war axe, suitable for heavy cuts and smashing through an opponent’s guard.

The axe is one of the first tools to be manufactured by humankind. The simplicity of its construction and its inherent versatility means that axes have been an integral part of every human culture.

Rated 4.50 out of 5
510.00 USD – 550.00 USD
Select options
We use cookies on our website to give you the most relevant experience by remembering your preferences and repeat visits. By clicking “Accept”, you consent to the use of ALL the cookies.
Cookie settingsACCEPT
Manage consent