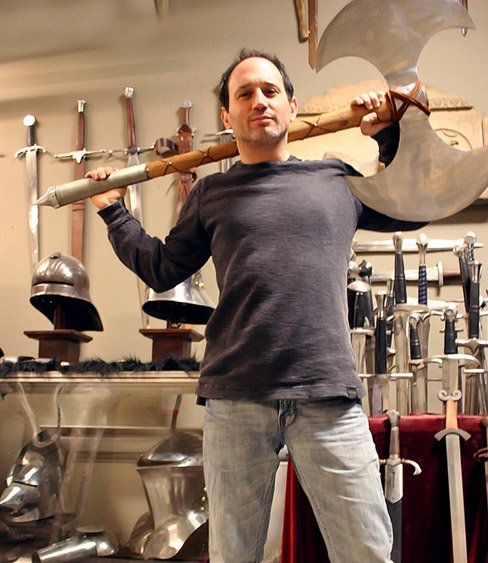 The orcs are coming. The heroes are surrounded. All hope seems lost – until with a mighty bellow, the barbarian warrior clears a path to safety with his improbably large axe. The day is saved thanks to the barbarian’s mighty thews, and his mightier axe. If the above scene sounds familiar to you, then you will probably also recognise this axe. In television, in movies, in video games and in tabletop RPG’s the fearsome barbarian reigns supreme. Often the party’s “tank” or damage-absorber, the barbarian is at the forefront of combat at all times – and often wields a weapon like this. Two-headed axes were not common historically due to the fact that if your attack bounces off of an opponent’s armor it means an equally heavy and sharp axe head is probably headed straight back at you. However, in fantasy many weapons that are impractical get a pass due to the “rule of cool.” The two-headed Barbarian fantasy axe is one such weapon. This axe is an incredible feat of smith work and craft. Weighing a total of 12 lbs (!), the axe is 48 inches long and has two equal sized, crescent-shaped heads. While we don’t recommend using it for combat, it is as battle-ready as every other product in our catalogue. It would certainly turn heads at the renn faire or make an imposing centrepiece to your collection – assuming you can find hooks big enough to keep it on your wall.

225.00 USD – 240.00 USD
Select options
We use cookies on our website to give you the most relevant experience by remembering your preferences and repeat visits. By clicking “Accept”, you consent to the use of ALL the cookies.
Cookie settingsACCEPT
Manage consent