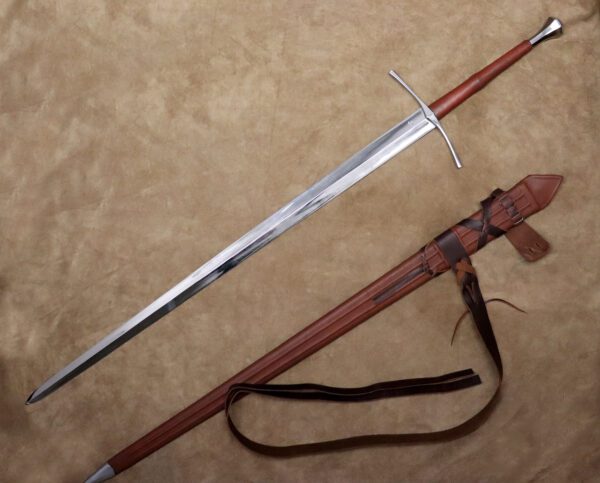 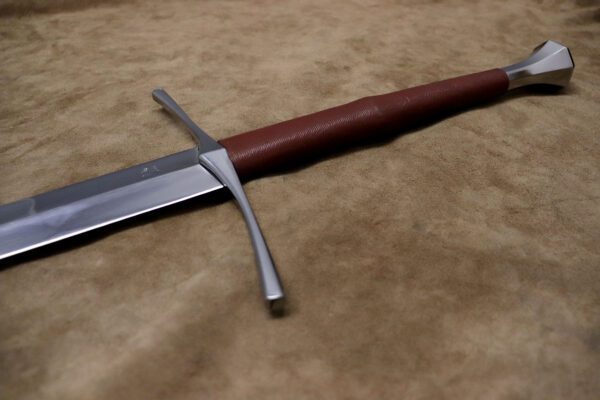 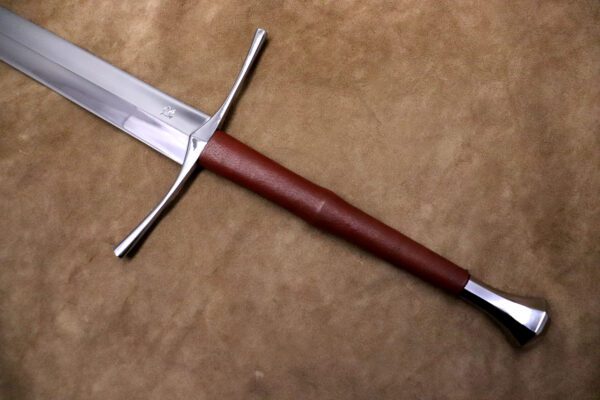 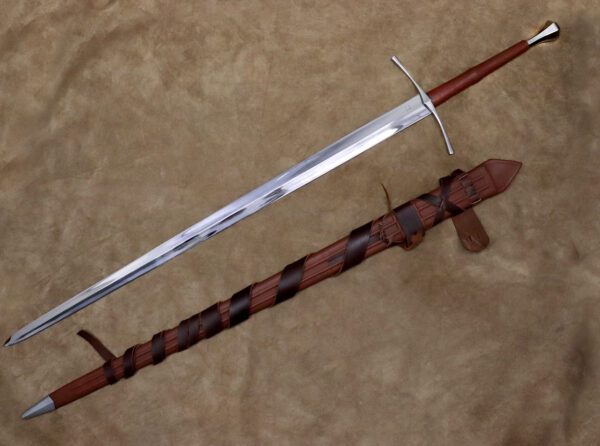 Inspired by the Italian greatswords of the 16th century, the  Medici, type XVIIIb, Two-Handed Sword is a surprisingly elegant and nimble design. The long, slender blade is rendered a strong thrusting weapon due to the diamond cross-section, allowing it to slip between plates of armor and split rings of mail. Yet the reasonable point-of-balance and extended, leather-wrapped handle create a weapon that flows smoothly through guard, cut, and thrust, not limiting it to a single style of offence. The gracefully curved guard and scentstopper pommel complement the simple and straightforward blade, and everything is polished to a mirror sheen. The Medici, named for the Italian political dynasty that were for a time the de facto rulers of Italy, is a beautiful weapon that deserves to be a centrepiece in your home.

As the Middle Ages receded, many changes began to occur in Europe’s political landscape. Wars had always redrawn borders and consolidated power into rulers’ hands (or, as the case may be, removed it), but with the advent of the Renaissance a new arena emerged in which humans could do battle. Merchant families – families that had no hereditary titles, yet did manage to create successful enterprises – rose to sudden power, and suddenly the nobles who had enjoyed power and authority unchallenged found themselves outmatched in these new economic feuds. Of these Renaissance merchant families, none wielded more influence than the House of Medici. 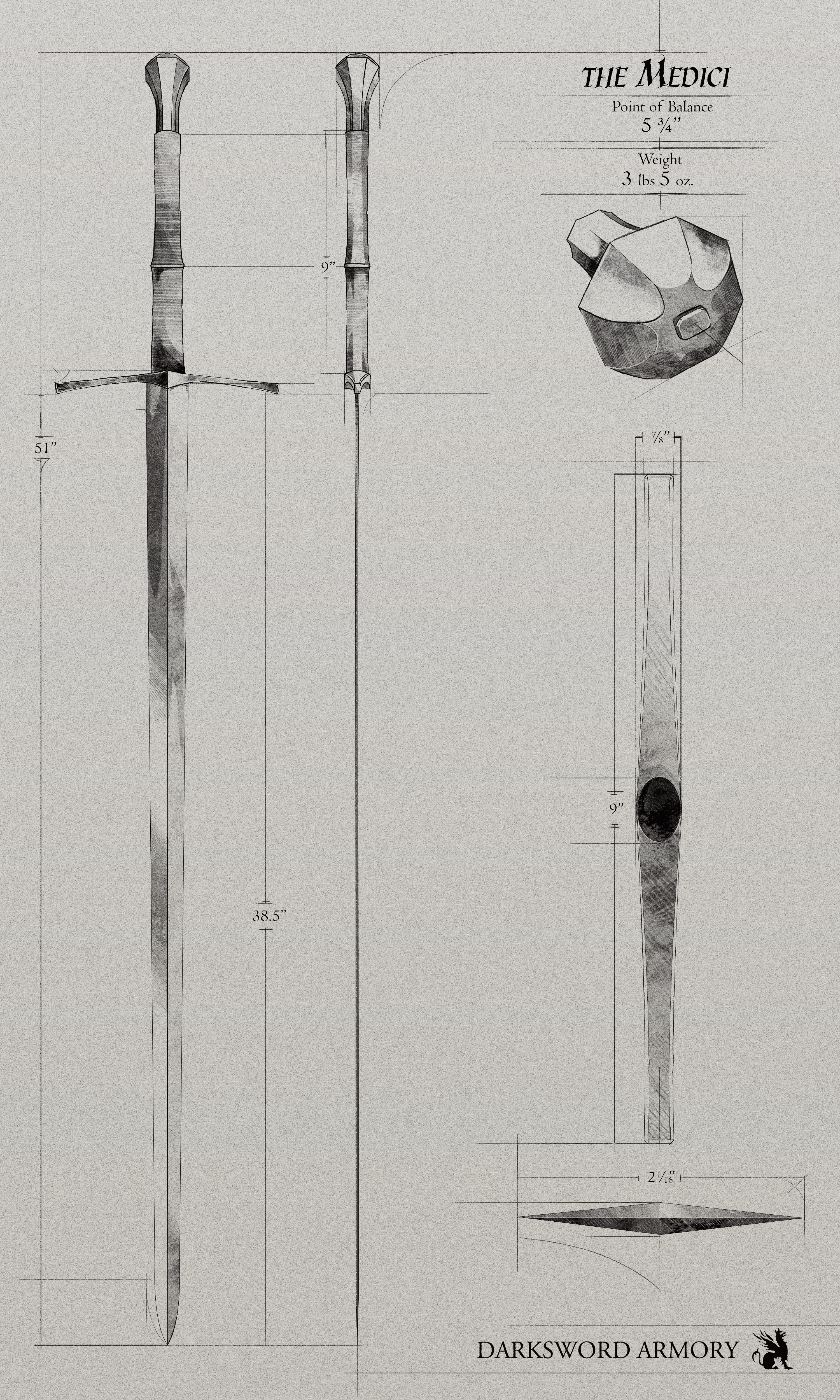 In the late 14th century the House of Medici, historically a family that dealt primarily in textiles and wool, established a bank in the Republic of Florence. This bank (the Medici Bank) appeared at precisely the right time to slide into the void left by the sudden and unexpected bankruptcy of the Gran Tavola, at the time one of the largest banks in Europe. This excellent timing catapulted the House of Medici to fame and fortune, and of course considerable political power as well. This was to the great alarm of the existing nobility, who watched with dismay as families of “low” birth suddenly acquired wealth beyond what the nobles themselves had – if, indeed, they had any left at all. The Medici Bank would be a European institution, and became the official bank of the Vatican, bringing Florence (and the Medicis) considerable wealth. This wealth would actually create the Renaissance itself as the House of Medici funded an unprecedented amount of art, music, architecture, and culture. Among other things, the Medici bankrolled the construction of the Florence cathedral as well as St. Peter’s Basilica, and some claimed they funded the invention of opera and the piano. Some of the history of the House of Medici is recounted in the popular Netflix series Medici, which covers some of the family’s history in the mid-15th century. Focusing on brothers Cosimo and Lorenzo de’ Medici, sons of the family patriarch Giovanni de’ Medici, it details the rising political and cultural power of the House of Medici – and the enemies they make along the way. The series is relatively well done, with high production values, gorgeous set design, and excellent acting from the members of House Medici (although for our part, our favourite character isn’t even one of the Medici family – it’s Marco Bello, the no-nonsense servant and bodyguard of Cosimo de’ Medici).

While art and culture (largely funded by the House of Medici) brought about the next stage of human history, developments in arms and armor continued apace. The two-handed greatswords of the Renaissance were, by comparison to their earlier medieval counterparts, marvels of engineering and metallurgy. Advanced techniques and access to better quality steel allowed for longer blades to be made of less metal without losing strength. Centuries of war and preparing for war gave us a wealth of knowledge about what worked on the battlefield – and what didn’t. Advancements in bladesmith skill, built on the generations that came before, informed better and more refined techniques. With the benefit of those centuries of experience and more, we are pleased to bring you the latest generation of Renaissance-inspired swords.

The Darksword Armory Medici Two-Handed Sword is inspired by the spirit of the Renaissance. The inspiration for this piece was the surviving examples of the Oakeshott Type XVIIIb, and to those familiar with this typology the lineage is clear in the long, slender design. The first component that catches the eye is the scentstopper pommel, a hallmark of many Renaissance swords of similar style and an effective counterweight for longer blades. Moving upward, a shapely leather-wrapped grip leads to a slender and simple guard that evokes the image of a soldier’s weapon. The long, double edged blade is stiff and resilient, made all the more robust by the diamond cross section that reinforces its design. Of course, the 5160 steel alloy certain helps – like all our swords this steel provides excellent an excellent foundation for a tough yet pliant weapon.

Italian sword schools – surely among the greatest in Europe – often focused on proper technique and control, and it is here that the Darksword Armory Medici excels. The long grip provides ample room for a two-handed grip and allows for full force to be applied to sweeping blows – or for precise control when aiming for gaps in an opponent’s armor. Handling this sword is a true pleasure, and its blade presence is such that it feels ready to move into the next stance or cut. This sword may not be a cathedral, but it was made in the same spirit of innovation that caused the House of Medici to reshape Europe – we hope you will feel that spirit when it is in your hands

Be the first to review “The  Medici Longsword (#1552)” Cancel reply

Rated 4.17 out of 5
580.00 USD – 710.00 USD
Select options
We use cookies on our website to give you the most relevant experience by remembering your preferences and repeat visits. By clicking “Accept”, you consent to the use of ALL the cookies.
Cookie settingsACCEPT
Manage consent