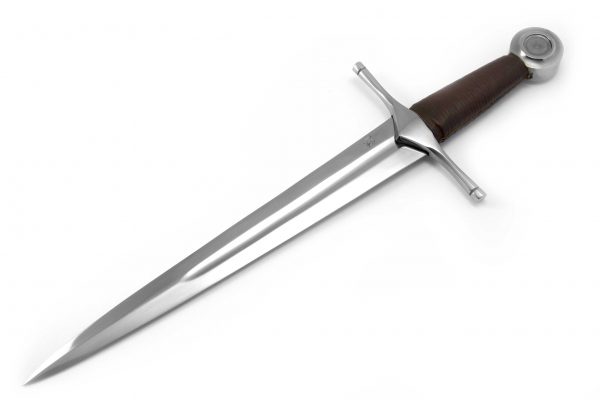 The Normans (also called Northmen or Norsemen) were Scandinavian Vikings who raided the European coastal settlements during the 8th century.

The Normans (also called Northmen or Norsemen) were Scandinavian Vikings who raided the European coastal settlements during the 8th century. Despite their eventual conversion to Christianity and their adoption of Frankish cavalry warfare, the Normans retained many of the traits of their Germanic ancestors. Norman culture was known for ferocity and strength, which is probably why it spread its influence almost unchecked across Europe for centuries. Examples of Norman influence show up in art, language, religion, and especially in the relics of warfare that remain from this turbulent time.

This Norman Dagger is companion to our Norman sword. It has an identical straight guard and wheel pommel typical of weapons of that type. Like the sword, the dagger’s blade is forged from 5160 high Carbon Steel and tempered to a Rockwell of 53, making it just as battle-ready. For combat or everyday use, this Norman Dagger would be an effective piece for any Norman fighter, and would be a fine addition to any collection.