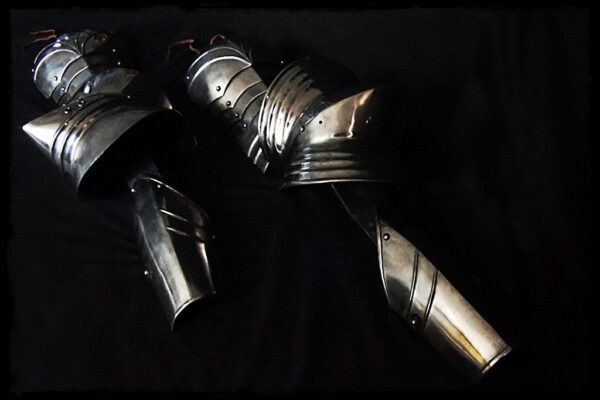 These full Gothic Arms are inspired by a 15th C. model.
The length of the arms are fully adjustable with a strapping system. The pauldrons can be attached to a Mail shirt, Gambeson, armor, padded armor, or gorget.

Plate armor offered a medieval warrior more protection than any other kind of armor that came before it. Gothic armor refers to a type of plate armor made in Europe during the 15th century, and was known for being highly stylized. While Gothic plate armor was functional, it eventually became less regularly used in battle and more regularly seen on parade – hence the emphasis in many Gothic styled armor on intricate designs and accents.

In melee combat, a warrior lives by the strength of their arm. When you swing your weapon you make yourself vulnerable to counterattack, and your arms would be natural targets for an enemy’s blade. These full Gothic Arms are inspired by a 15th century model, and are constructed of high carbon steel. One part of a full suit of armor, they offer exceptional protection and articulation and provide a surprising range of motion to the wearer. The length of the arms is fully adjustable with a strapping system, and the pauldrons can be attached to a mail shirt, gambeson, armor, padded armor, or gorget. The Gothic Arms are made in house by Darksword smiths to our exacting standards.