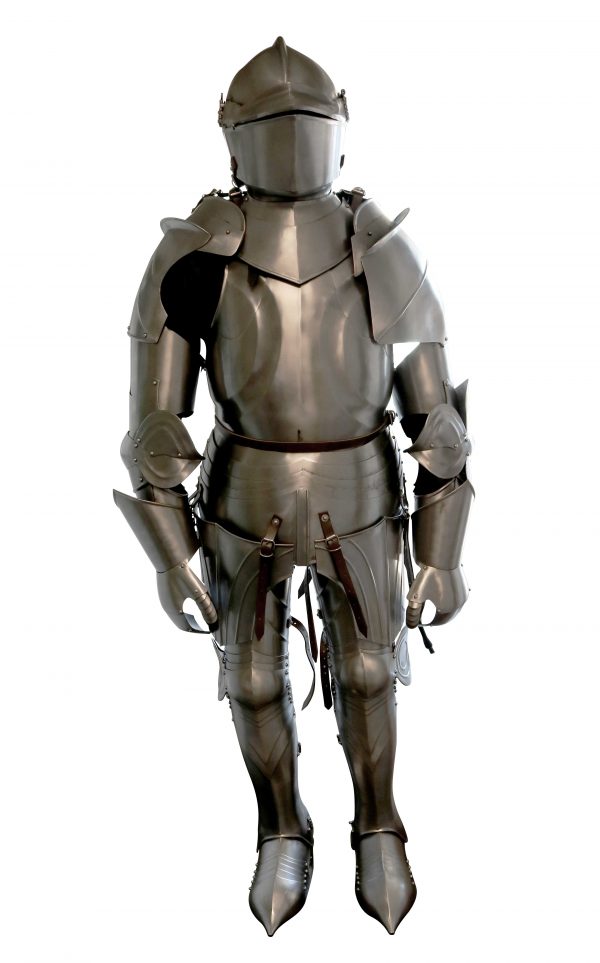 Darksword Armory’s Late 16th Century Jousting Armor is a modern rendition of the iconic protective gear made famous by the medieval sport of the same name. For over four centuries jousting was a popular sport throughout Europe, and resulted in the development of specialized armor designed to protect participants in this deadly game. This jousting armor, based on surviving examples from the late 16th-century, was commissioned at an external forge for distribution by Darksword Armory. Fully functional and articulating, it would be a stunning centerpiece to any collection.

For centuries, the deadliest force on the battlefield was the heavy cavalry. Armored knights, high atop heavy horse, rode down their foes with lance in hand. It was terrifyingly effective as a battlefield tactic as the knights were both well-protected and highly mobile, but it required significant skill and training to perform. From the 11th-century onward knights would practice diligently on horseback, learning to ride swiftly while armored and strike targets precisely with their long wooden lances. These practice sessions would be against stationary targets and fellow knights alike, and could be almost as dangerous as actual combat. Out of these practice sessions grew the sport of jousting – adapted from heavy cavalry practice and transformed into a controlled, but still dangerous, contest of strength and skill.

Jousting, as a sport, grew in popularity and complexity throughout the middle ages. Early versions were mere training matches between fellow knights, but as the medieval period continued the joust began to be surrounded by fanfare, markets, feasting, and notions of honor. Nobles and even royalty began to practice the sport, and specialized equipment began to be designed for the event. From the 11th to the 14th century people came together to observe what was still fairly brutal mock combat – including knights riding at each other with lances across a field separated only by a low fence (called a tilt, hence tilting as the other name for the sport), and then switching to close-combat weapons on horseback or on foot. As a result, plate armor – including specially constructed protections for the legs, chest, and face that were designed to reduce the danger of being hit by a wooden lance at high speeds – were the norm.

As Europe transitioned into the later middle ages, the medieval concept of chivalry became strongly associated with the joust. The concept was only loosely based on reality – the “knight errant,” while more of a fictional creation, began nevertheless to influence how knights and the cultural structures surrounding the, developed. Jousts began to high highly regulated, with more rules and expectations of fighting according to the chivalric code. This often meant fighting in such a way that would most likely get you killed in a pitched battle, including not taking advantage of an opponent who stumbled or who suffered an injury. Th arms and armor used in these contests evolved as well, not only being focused on function but with an eye towards form. Jousting armor became an opportunity for armorers to showcase their talent, creating stunning works of art that would be displayed before all in the tournament – before the individual wearing the beautiful armor was sent flying from their war-horse to land in the mud.

The Darksword Armory Late 16th Century Jousting Armor is an example of some of the armors that emerged near the end of the jousting era. Specially commissioned by Darksword Armory from a forge in India with a long history of making similar works, this armor is fully articulating for maximum range of motion. Made of 18 gauge steel – meaning, thick enough to function in mild mock combat, but not as thick as historical jousting armor – this armor is also subtly decorated, and might resemble the armor worn by a young knight or minor noble just beginning their career. Balancing form and function, this Late 16th Century Jousting Armor would make for a beautiful display in any home or collection.