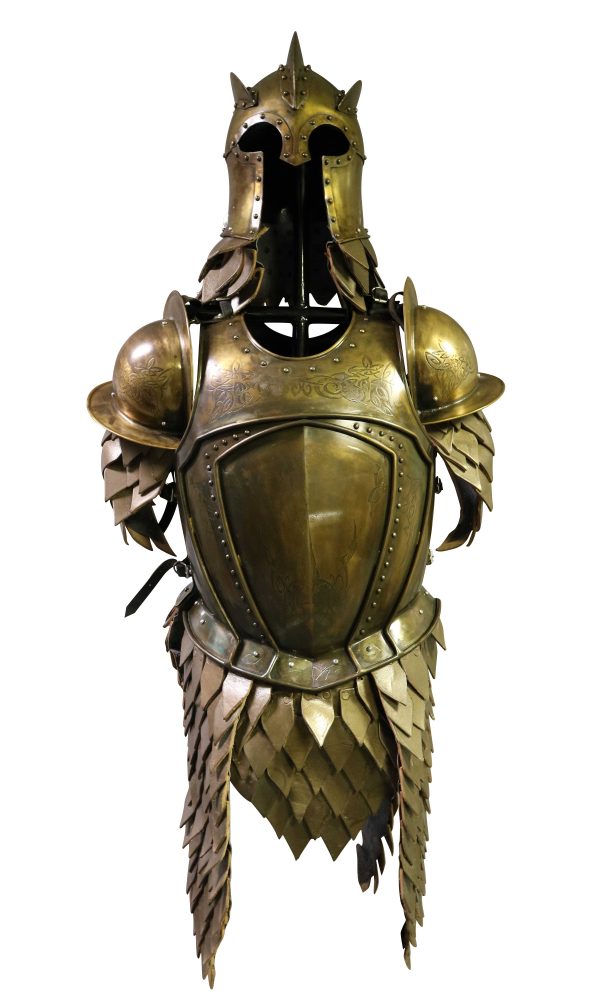 The Darksword Armory Game of Thrones Armor is an expertly crafted piece inspired by the HBO series of the same name. Sourced from an external forge, but subjected to Darksword’s quality control standard, this armor is based on the armor worn by the White Swords – members of the Kingsguard, who swore their swords and their lives to the service of the King. Made from 16 gauge steel, this armor is suitable for display purposes or for costume use. For fans of one of the most famous and popular television series of all time, the Darksword Armory Game of Thrones Armor is an epic homage to the greatest knights of Westeros.

In 2011, production company and broadcaster HBO embarked on an endeavor that would change the landscape of broadcast television. Drawing from fantasy author George R. R. Martin’s popular A Song of Ice and Fire book series, the production giant created an epic fantasy series unlike any that had been done before. Game of Thrones quickly became an international phenomenon, breaking records and becoming the “must-see” series of the decade. Everything about the series was a massive draw for viewers – the writing, the acting, the directing, the special effects, everything was expertly crafted with no expense spared. It probably didn’t hurt that there were frequent and steamy scenes of intimacy between the beautiful and very in shape members of the cast.  Game of Thrones ended in 2019, and with it ended a story that had captured imaginations around the world for its scope, breadth, and depth of mythology.

In the world in which Game of Thrones takes place, the fictional land of Westeros is ruled over by the “King of the Andals First Men.” This monarch, seated on the Iron Throne, reigns over the territories known as the Seven Kingdoms. These kingdoms form a loose alliance of provinces that stretched from the far south all the way to the titanic structure of ice in the North known as The Wall. During the majority of the series, the role of sovereign is held by members of House Lannister, a family known in the series for deceit, betrayal, and unconventional sibling relationships.

The King of the Seven Kingdoms is protected by seven knights known as the Kingsguard, ostensibly the most skilled and courageous knights in the land. Swearing holy oaths, the Kingsguard pledged to never marry, never father children, and never seek wealth or glory of their own, but to dedicate every moment to protecting the King and royal family. These knights were chosen for their prowess in battle and for their unparalleled loyalty – which is ironic, considering the reigning monarch prior to the start of the series was assassinated by then-Kingsguard Jamie Lannister. This assassination led to the ascension of Robert Baratheon to the Iron Throne and his marriage to Jamie’s twin Cersei. Jamie Lannister remained a member of the Kingsguard, and watched over his sister as House Lannister slowly established its stranglehold over the Seven Kingdoms.

The Darksword Armory Game of Thrones armor is inspired by the Kingsguard that protected the ruler on the Iron Throne. The armor these knights wore was gilded, shining even from a distance, and often worn with white cloaks – hence the name often given to the Kingsguard, “The White Swords.” The armor featured here has been commissioned by Darksword Armory from an external swords, and is made to our exacting standards from 16 gauge steel with leather accents. Unlike the armor made in house by Darksword, this armor is not battle-ready nor is it customizable – however, it is still an exquisite piece that would be suitable for cosplay, renaissance faires, and display. Inspired by the incredible work of George R. R. Martin, the Darksword Armory Game of Thrones Armor is sure to impress friends, family, and anyone who watched the most famous television series of this generation.